In the sixties, at the height of the cold war, the U.S. had 30,000 warheads. Under the treaty signed this past April by us and Russia, both countries will be limited to 1,550 long-range warheads -- we won't build anymore, if they don't build anymore.

Even so, nukes are a real terror.

We know, from two nuclear bombs we dropped on Japan, the "accident" that happened in Chernoble, Russia, that a single nuclear bomb can kill millions, devastate the land, and continue to have incalculable physical and chemical effects for years and years afterward.
What about Jihadists, who want to destroy us, no matter what the cost to them personally? Can they, will they find a way to build a devastating nuclear bomb? 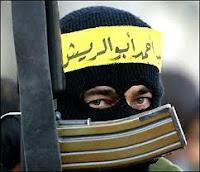 And what about the crazies -- mentally deranged persons, or maniacal fanatics?

They're in the U.S. and many other countries around the world. Angry, desperate, passionate, religious guys who hate us, what we stand for, and what we represent.

Hate is in the air. The idea of murdering people who aren't like you, who think differently, worship differently from you, has not only caught on, it is also spreading.

Islamists have a thou shalt not murder law, as we do. But their law can be interpreted in different ways. In the Koran if you see a wrong, and it's against what you swore to upheld, the Koran says it is your duty to ignore your oath, and stop the wrong.

Words, oaths, allegiance -- doing what's right, can be stretched, mushed, pushed, and re-adjusted. What does it matter if they have good reasons or bad reasons? Some Islamists want to annihilate us.

And we, on the other hand, are intensely involved in ferreting out possible terrorists. Americans are now burning the Koran, threatening to burn more, talking about segregating Muslims, and stopping them from building Islamic centers everywhere, not just in New York City.

The book burners think all Islamists are the enemy -- the enemy is trying to kill us. It's banish them, kill them, or be killed.

I don't see people or countries making an effort to negotiate with Islam -- offering to sit down with them, and finding out what we can do for them, that would make them put away their weapons and squelch their desire to destroy us.

Our Secretary of State is meeting at regular intervals with major powers to discuss ways the Israel/Palestine conflict could be resolved without a horrendous war. How far, far, far, faraway is the possibility of negotiating with the Taliban, the Jihadists?

Am I one of the crazies, because I think it's a way to go, something to try?

Sometime this fall, the Senate will take up debate over the new Strategic Arms Reduction Treaty that we signed with Russia. It takes two-thirds of the Senate to ratify a treaty, which has been endorsed by dozens of generals and major national security officials. The no-sayer Republicans are stopping the White House from getting this treaty ratified.

But the no-sayer Republicans cannot stop a meeting. The White House and Secretary of State could attempt to negotiate with the Taliban.

I think it's something we need to try.

Em, while I truly respect what you are saying, there is NO negotiating with CRAZIES! Whether they be religious crazies, military crazies, or just plain certifiable crazies!
What we deem rational, they deem crazy. They just dont see the world through the eyes of others...in other words, sympathy and empathy are not things that they feel.
I refuse to lump ALL religions, or radicals into one group. Some get unfair lables, simply because their ideas and values are different. But when someone or some group is bent on destroying a way of life, there is no negotiating. Even if you did, how could you believe they would follow through. Too much at stake to take them at their word.
Just my opinion...Thank goodness we live in a country where we are still free to express them. :)

I just don't see how we could possibly negotiate with the Taliban. They are not people that can be reasoned with IMO.....