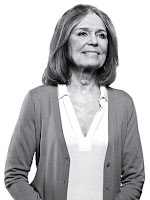 Great blog today Emily-I love Gloria Steinem! I remember her in the 1970's and all she did to women's liberation movement and is still as beautiful, sharp, and witty. I admire what she stands for and hope to hear more from her as she is a great woman of the ages! I remember buying and wearing Gloria Steinem glasses...Lol!
kam Kathleen Ann McGee

She has always been one of my heroines as well. I have always greatly admired her. She was able to remain very feminine and still be a strong, powerful advocate for women's rights.

I was quite active in the Women's Movement in those great days. I too had a subscription to Ms Magazine.

I even found myself, in one march, right next to Bella Abzug.

It has always bothered me that the ERA never passed.

I have really digressed...YES I love Gloria Steinem too! A great, great woman!!!!