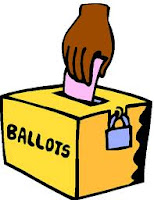 Watch, and listen -- it's the liberal side of a looming BIG, MAJOR, IMPORTANT, URGENT issue.

Oh boy, Sharpton makes disenfranchising voters sound like a new Republican tactic, a new way for them to win the election in 2012.

Gee, I can't help remembering when George W Bush was elected -- the voter fraud issue -- after weeks of legal battles over the recounting of votes in Florida, the findings that proved Al Gore won that election. On December 13, 2000, though Gore sharply disagreed with the Supreme Court verdict that ended his bid for the presidency, Gore said, ''Partisan rancor must now be put aside. I accept the finality of the outcome, which will be ratified next Monday in the Electoral College, and tonight, for the sake of our unity as a people and the strength of our democracy, I offer my concession.''

Gore won the national popular vote by more than 500,000 votes, but narrowly lost Florida which gave the Electoral College --271 to 266 -- to Bush. And we got Bush/Cheney, war, 4,810 dead, Abu Ghraib prison, waterboarding, and on goes the list of wrongdoings.

Here's what I learned from Brian Montopoli, reporter, for CBS Online News' Hot Sheet. The Brennan Center for Justice, a think tank at New York University, reports that 34 states have introduced voter identification laws this year that create hardship for 3.2 million Americans who want vote.

Republicans say they're promoting new restrictions on voting because of voter fraud, because voting machines -- new ones and old ones -- are too easily hacked.

The "Vulnerability Assessment Team," at Argonne National Laboratory in Illinois, found that the old machines can be hacked by anyone with an 8th grade education, with parts that cost $10.50. You can hack the new Diebold voting machines by inserting a piece of "alien electronics"-- it costs $26, requires a decent amount of knowledge and access to the machine, but it is possible to do on "every electronic voting machine."

Roger Johnston, leader of the assessment team, told Salon.com, a national online media magazine that reviews technology, "This is a national security issue. It should really be handled by the Department of Homeland Security."

At the moment, the Republican voting reforms that are designed to prevent fraud are discouraging first time, young voters and low-income voters -- and yes -- these are voters who tend to vote Democrat.

New laws in Kansas, South Carolina, Tennessee, Texas and Wisconsin require photo ID. (Only One in 10 voters has them, according to the Brennan Center report.) Other states have cut back on early voting that's used by millions of Americans. Two states have disenfranchised voters because of their past criminal convictions, despite the fact that these voters are currently taxpaying members of the community. Florida and Ohio are eliminating early voting on the Sundays before election day, which is when some African-American churches organize voters to go to the polls.

Meanwhile, Nancy Pelosi, house minority leader in a congress that has vowed to stop everything President Obama is trying to do, has been traveling, making speeches, attending town halls, working with state legislatures to revise these laws, and meeting with local church and community groups, revving up voters in the states where they now have to fight red tape and spend money to obtain voter ID's.

Wow! It's a huge problem that could take billions of dollarts to solve. Nowadays, nobody can win without the loser claiming fraud. No doubt about it, the new laws will keep a lot of people who elected Obama from reelecting him in 2012. It reminds me of the debt ceiling issue that hangs over our country. There are solutions, but in my opinion, a Republican in the White House will not solve or fix any of our current huge issues, including voter fraud.

Back and forthing over what I've learned, I think we need to reelect Barack Obama and get a Congress that will help president Obama pass legislation and tackle the urgent issues in America.

Dear Emily: THIS SOUNDS LIKE A BIG MESS! Will this photo ID stuff affect me voting early through the mail in Kansas since I am handicapped? The Republicans are trying to red tape the voting pleasure and make it a misery instead. Maybe we should go back to counting the votes by hand...this would certainly give ALOT OF JOBS TO THE UNEMPLOYED!
kam Kathleen Ann McGee

All this reminds me of the poll taxes in the South back in the 50s.

I am in 100% agreement with you on everything that you said. I am especially concerned at voter machine tampering and the photo id issue for poor people and students who will not be able to obtain the required ID.

The Republican tactic seems unAmerican, we need to help people to get to the polls and vote Democrat. The current Republican party platform has nothing I can support, what has happened to this second party, they seem to be a pawn for the extreme Christian right and Corporations sacrificing the country and American people to out President Obama. I'm just disgusted with everything they are doing and are responsible for doing through foundations and Corporations. I'm re-posting this on my wall and I hope everyone else does too. Let's post it on twitter too. Hugs, H.