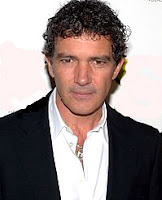 Antonio is sooooooooooooo handsome and such a winning actor-I like him alot! I think he and Melanie make an adorable couple. He is a hot star in my book. He was in the movie-Zorro-also with Catherine Zeta and Anthony Hopkins and was so good!
kam Kathleen Ann McGee

I don't think I would recognize Anthony Banderas if I saw him in the street. Perhaps I have just not seen enough of the movies that he's made.

When I think of Antonio Banderas I immediately think of Desperado, Zorro, and Original Sin. I think that as an actor is who he is. He's essentially a B-List action star, think Ballistic: Ecks vs Sever. Recently he's added his voice to the Shrek franchise and has his own in the new movie Pussinboots. He garnered a Golden Globe award for best actor in Once Upon A Time in Mexico which is 2nd to the Academy Awards. The thing is, when you think of great American films, he's not in many of them. He does the cool bad ass, the sexy lover, or some funny; but not much depth. And he's done just as many Spanish movies and TV as he's done American. I'd certainly recognize him in the street and I'm sure he has a swollen bank account. And the fact that you wrote an article and my comment is this long, there's no question that he "made it" a long tile ago.

I agree...he needs to be less Antonio the heart breaker and more just the really fine actor that he is.

I had no idea that he played Tom Hank's lover in Philadelphia and I have seen that film several times, though not recently...So there you are...he can do it!