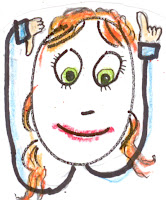 "Are you in fact, America's most important living poet?" The interviewer asked John Ashbery.

(I'd never heard his name.)

Ashbery, who's 84, murmured humbly, "I get talked about a lot. I enjoy writing the way I do, which doesn't please a lot of people and pleases others enormously, and I guess that's all one can expect."

Belinda Luscombe, interviewing him for Time, asked Ashbery about fame and groupies. (I thought it was a weird question to ask an 84 year old poet, but Ashbery handled it perfectly.)

Ashbery replied, "I was once recognized by a sort of hippie taxi driver, but that was a long time age."

Belinda's next question, "How do you spend your days?" inspired J.A, to say that he writes maybe once a day, once a month, or sometimes just every three months of so.

(Hmm. So how does this poet pay the bills? Do his poems get bought? How much money can a poet make, these days? If my husband wasn't a successful actor, I'd be teaching dancing as exercise (I did for a year-- it cost me money to keep Dancehouse open, and interfered with my writing.)

B.L declared: "There's a wide discrepancy in critical opinion as to what your work really means. Shouldn't you straighten that out?"

"Not at this stage in my career" said honest, humble poet John A. " It was long time before my poetry was first published and then read and then discussed. Those stages took decades, and it wasn't until I was about 40 that I felt that I had an audience. My first book only sold 800 copies over a period of eight years. Before it came out, I was expecting to be hailed as a poet the next day in the press."

(Ahh --the quick sand -- one's expectations of success -- I had high expectations. At various stages of my writing career, four prestigious agents signed me up.and promoted me but I didn't go up, or down, or anywhere. )

B.L: "Do you ever read what the critics write about you and think, 'This is just ridiculous?'"

J.A.: "No, because maybe they're right. I haven't got that much confidence in my writing. It's more like hope."

(That tuneless tune the artist hums inwardly -- "who am I, am I worth bothering with?" If Em the writer, ex dancer has confidence, it's only for a moment or two.)

I took a coffee break and started looking up Ashbery's poems -- found quotes from his poems with thumbs up, thumbs down icons along the sides of the pages; found it depressing that thumbs --"dum-de-dum" -- could mean life or death for an artist.)

B.L rang the bell on success and failure, asking, "Do you ever think of death?"

"I've never not thought about it," said Ashbery.

(Yay J.A. -- even when we don't think about it, death is there. I think it's part of living, breathing, doing a day, ending a day, resting up for tomorrow.)

Ashbery told B, "There are not that many things to write poetry about. There's love and there's death, and time passing, and the weather outside, which is horrible today. I'm so glad I'm not writing poetry today. The weather gets to me when I write."

The talk floated around death and religion until B.L. said, "You grew up in an era when it was considered shameful to be gay. How would your work change if you grew up now?"

The truthful, unpretentious poet Ashbery replied, "There is a school of criticism that says that my poetry is so torturous and obscure because I've been trying to cover up the fact of my sexuality all these years, and I think that's an interesting possibility. But I'm not sure whether that's the generating force in my poetry. I think I would have been attracted to the surrealists anyway."

The Q & A session ended with B.L wanting to know if he could be the most important something else, what would it be?

Humbly, unpretentiously, J.A. said, "I guess it would be wonderful to be America's greatest living painter and have acres and acres of one's work to survey and have prizes and museums and wealth, but I think I'd rather stick with poetry."

I Googled. I've lingered over Ashbery verses, phrases that have left me with impressions of this and that -- nothing to hang onto but footprints in the sand of where the poet's mind traveled.

If you are in the mood to wander, click quotations or this link that will take you to some Ashbery poetry. Or visit the interview. Listen and see if your thoughts, as you watch, are like or dislike.

I think poetry is the salt and pepper to life. It changes with the season's chnaging and i enjoy the ebbs and flows it inspires. I am not familiar with Ashbery's work so I will have to internet and read some. Thanks for sharing....
kam

This article is pretty brilliant. I loved how you filterd your ideas in between the interview. I think his responses were perfect to the questions. Who are we as writers? That's the question, there's no real answer I guess until our idea of success is achieved. In most of our cases, never. I think i can live with that. Writing for the love of writing. I'll be able to get at least 1 reader. In it for the long haul. :)

I love the poetry I read in school, and I occasionally read a poem in The New Yorker, but otherwise I tune out when it comes to poetry. It's probably my loss.

EM said "(I'd never heard his name.)"
* * *
Me either EM so thank you for bringing him to our attention. I love poetry but am not particularly well educated about it in the first place....
* * *
I did click out to the 'quotations' link you provided & must not be the correct frame of mind for myself..most of them in quotations form I was unable to process, feel or specifically understand. Oh sigh which is my own 'aged way' of saying 'oh snap' I reckon!
* * *
Luv ya! I'm @grammakaye on twitter.