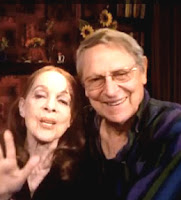 It was a big drama when John Cullum was hired to replace Louis Jordan in the musical, "ON A CLEAR DAY" during it's pre-Broadway, out-of-town tryout in Boston.

Replacing the star in a musical comedy -- learning the script, songs, blocking and choreography is a very difficult, tricky thing for any actor to do. And lyricist, author Alan J. Lerner wanted John to perform the role of the psychiatrist in one week -- play the starring role on the gala opening night in Boston.

It was very hush hush. The composer Burton Lane, choreographer Herbert Ross, and director Bobby Lewis knew Jordan was being replaced, but the cast hadn't been told, newspapers didn't know.

I was there with John -- it was his first starring role, a big break. We were met at the airport by Alan's assistant and Dr. Max. Right off the bat, we learned from the doctor that he was helping everyone in the show. A rather big bear of man, he seemed to want to help me to adjust, to relax, to enjoy my visit to Boston.

After we checked in at the hotel, we were ushered to Lerner's suite where we were to stay secretly while Alan stayed on his boat. Entering, we saw on every flat surface, vials, and hypodermic needles. The phone was ringing. It kept ringing constantly.

What we learned during that week of rehearsal in Boston, from the phone calls from celebrities -- calls that came in constantly -- was that Dr. Max was a very famous guy who treating some of the world's most famous people.

To be fair, he may have been giving them b12 shots. I am so glad that you did not partake in the unknown enzymes.

I find you two so much fun.

Wow! What a story! It was scary and strange about DR. Max. Reminds me of the Michael Jackson and his Dr. that got found guilty of killing him. Glad you both escaped this crazy dr's grip and John had a successful play! kam

SHIVERS! Total shivers for you. It must have been like walking into a really life "Twilight Zone". Odd & skeery! WOW!
* * *
I particularly loved the EM & John chemistry in this video. As always and forever, love to you Ms. EM, your John Cullum and your FAMILY! I'm your friend @grammakaye on twitter.

In those days everyone who was even slightly in the know (like me), knew about Dr.Max "Feel Good" Jacobs.

More importantly though was the miraculous story of how John mastered all of that dialogue and all of those songs (to rave reviews) in just one week's time. I have read about just how amazing he was and I have seen and heard videos of his brilliant performance. Sadly I never saw the show and I so wish I had. I have seen JC a number of times on Bway, but not in that one and in retrospect, I could kick myself for missing it.

I still get chills whenever I see the clip of JC singing "Come Back to Me"!

I remember (as a child in NYC) hearing about Dr. Max and his "enzymes." I'm so glad you didn't succomb to the temptation.