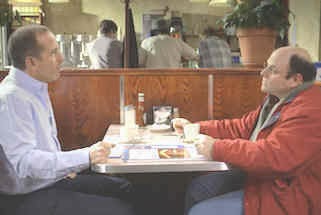 Did you see it?  It was Jerry Seinfeld and George -- one of those million dollar ads --  the two of them sitting across from one another.

It was the two of them right now, today.  They were older. Both of them had less hair.

I watch re-runs of  old Seinfeld episodes. I see them whenever it's possible -- it's usually possible at dinner time, when we turn on our kitchen TV.

I get absorbed in the story even though I have seen it previously. It seems fresh. I laugh. Sometimes I cheer, or applaud Jerry, or George, Kramer, or Elaine.

Ooo -- I didn't like seeing a thicker looking Jerry with a receding hairline. It clashed with my sense of him as the wryly amusing, sophisticated, self-aware bachelor.

Of course, I know that many of those episodes are around 15 years old.  Of course, I've seen Jerry briefly in a few guest appearances and news alerts, and I was aware that he was somewhat less handsome, and physically more mature.

Why does that ad, that Superbowl vision of him and George, continue to upset me?

Golly, we lost Shirley Temple -- she was major in the lives of my sisters, and me; and we recently lost Pete Seeger, who represented an energy and feeling for mankind that was unique and affected my world when I was working as a performer.

Seinfeld doesn't represent a special something-or-other to me, except a time in my life when I looked forward to watching TV, and sharing his casual but utterly up to date feelings of what was importantly unimportant.

Well,  maybe I'm mourning that he, and his humor, and that time in American life are gone, and probably I've been relishing the dinner time TV re-rums because they enable me to go back and relive them again.

Realty: Jerry Seinfeld is older, so are George, Elaine and Kramer.

Reality: I have to handle that they are older, and deal with what's importantly important -- I am more mature. Probably I am wiser.  Ooouch -- I am older.

some people age with grace, Seinfeld, not so much. He has gotten all puffy and way too self satisfied. It's not the lack of hair or the weight gain, it's that he seems to have lost his sense of humor and gotten too full of self righteousness.

I would love to see that ad.

A very clever post, as per usual Emily.
You are right It usually happens that TV shows tend to age quickly , as probably our sense of humour also does.. -

"-Jerry Seinfeld is older, so are George, Elaine and Kramer"....
Yes, TV shows are not like classic books ... They get older and lack of style as time goes by...
Best wishes, Aquileana :)