GHOSTS OF PAST TENANTS

Bandler played his drums in the morning. He played them anytime he felt like it during the day. His favorite time for playing was late at night. Ordinary neighborly complaints affected him NOT AT ALL.

This guy is in my gallery of people who inspire me to devastate them with words, shoot darts at them, forever beware of. (I've mentioned him before, in my 3/21 post, the "Go Spirit.") Before we bought this building, Bandler occupied this floor where we have our offices and our studio theater.

I'd phoned. I put a "please don't play after 11 p.m." note on his door. I complained to the landlord, who liked us and wanted to help us. He called Bandler. The noise continued.

Bandler usually practiced on his drums for about 45 minutes. He'd take a break, then play for another 45 minutes. Then, there was no noise for an unpredictable while -- a midday break for an hour, a few hours -- then the drums started again.

I tried vacuuming. We had a noisy Electrolux, the type with a tube on sliders. I vacuumed my wooden studio floor that was above his living room -- vacuumed back and forth dragging the tube like a recalcitrant puppy, so that it created a noise on Bandler's ceiling. Then I stood the tube up on the end from which the machine's noise emanated most strongly, and let the machine run.

It didn't seem to bother Bandler. I pounded on the floor. I did it with a shoe. Then I pounded with a heavy duty hammer. Day after day, I vacuumed, dragged the puppy, left the machine on, pounded, stamped my foot, kneeled on the floor and yelled STOP THE NOISE, and wept.

One day, returning home from class around noon, I saw Bandler at the window. He had a shotgun. He was pointing it downwards toward the street below, aiming it at people walking on the street, same as I was. Was it a game? His lips were moving ... was he saying "bang bang?"'

I saw him at the window the next day -- lunchtime seemed to be his time for playing whatever horrible game he was playing.

He never knew that I was the one who called the police. The police came. Two days later, Bandler moved.

A major noise problem developed when Stafford Recording studio rented a loft space on the 3rd floor of the building next to ours.

Oh no! Oh yes -- Stafford worked odd hours; walls of his insulated sound studio rested against my wall with the wooden barre I hold onto when I exercise. Oh sure -- there was brick in between, but oh my -- his clients -- vocal artists, bass players, horn players, and of course drummers. Lots of rhythmic noise invaded my studio.

I hired a contractor who insulated my wall with a layer of pink insulation material, and plaster-board, then another layer -- two layers were what were recommended. I had three layers installed. And still ...

I put four loudspeakers on the ledge outside my rear window that focused on Stafford's studio wall. Using my theater amplifiers, (sound equipment that could fill a large theater) I played Mahler's "Fifth Symphony" at top volume.

While it was playing, JC, more than a block away on Fifth Avenue, heard the Mahler's Fifth resonating.

No comment,, or response from Stafford, just a response JC who said, "Don't do that again, Em. We have to solve this another way."

We hired a lawyer. Our lawyer, Stafford's lawyer and the three of us met. No solution evolved. When he worked, I couldn't work. and I had no ability to control his schedule.

John suggested we hire Stafford record the sound effects for my play, "People in Show Biz Make Long Goodbyes." Stafford did a good job. And that kept me at the Orpheum theater, out of my studio for nine weeks.

Stafford sold his studio. The buyer turned it into a party room and if he gave parties, we never heard a sound. (Three layers of insulation took care of it.) 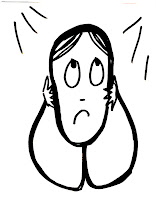 Even now, when a car drives by with its radio playing, the rhythm bothers me. I'm not able to think, work, dance, or do domestic chores while someone's invading my space. Once they drive on, I'm okay.

Yes, I'm damaged goods. If someone parks on our street and listens to their radio ... I pop in my Flents foam ear plus -- I've got sixteen boxes -- 25 pairs per box -- sitting on my shelf.
Posted by em's talkery at 5:21 AM

We had neighbors who played loud rap music after 2 AM (must have been at work up until that time). It resonated with our walls, even though there was 6 feet of yard between them. It was a terrible time. Ultimately they had a loud party, the neighbors called the police, and the landlord kicked them out. Fortunately we have a quiet family living next door to us now, but the house is for sale!! What next? A barking dog? Teenagers with drums?

As funny as this isn't, really, you did give me a good laugh! I hate audio-invasion, too. For example--at a stoplight when the guy in the car next to me is playing (what HE calls) 'music' so loudly that my car doors are vibrating and I can feel every pulse of it throughout my entire body, --well, let me just say that if many other people feel as I do, and with Arizona's new and ridiculously relaxed gun laws now, Tucson decibels may soon lower considerably!