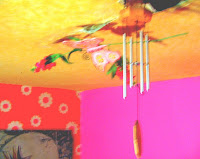 The roof leaked. Water poured into the hall as if it were being poured from a tea pot.

<------Here's the ceiling, the corner that leaked. The black area is the unlighted steps to the roof. The hanging stuff -- plastic flowers, a wooden butterfly mobile, door chimes from our cabin in Malibu -- it's what I'd put up to divert the eye from the bumpy looking plaster in the corner, where there was a leak two years ago.

Look and chuckle -- Em's decorating is usually "hide the flaws" with art work. (Two pictures show you why you wouldn't hire me to fix the trouble spots in your home.)

I get an idea and just DO IT! All the years of running a dance company, never having enough money for sets, props, and costumes have turned me into a good scrounger. I know how to make something bought for another purpose function in new, interesting way.

Okay -- the roof was fixed, re-roofed by Ishmail. We couldn't check the finished job till the paint was dry. Checking, we found three places that need to be re-done. JC is plumber, electrician, surveyor of things like windows, door locks, and radiators. I'm the guy who negotiates with the workmen as well as tenants.

So I had to tell Ishmail to repaint and fix (and not charge us). Also, I needed to tell our janitor Phil, a trained, skilled superintendent, that he was scratching the walls when he was taking the trash downstairs, and suggest he slide the trash down the stairs.

Back, back in time, when I took my company to London, took myself out of all leading roles except dancing Juliet, in "Romeo and Juliet," I realized that I needed to be a stronger director. Easier said than done -- I found it tricky to tell dancers (who were my age), what they are doing wrong, technically as well as dramatically.

In my makeup for Juliet (and a robe), I sat in the back of the theater each night, and whispered notes into a tape recorder. At night, after the show, I transcribed the notes into a notebook. The next day gave the notes. NO tactful re-wording -- I just gave the notes, forced myself to say everything that I'd whispered to myself.

I practiced doing it. And that's what I do now.

Yes, I still dread giving orders. But I gave orders to Ishmail and Phil.

What's the big deal this lady is making, over being a boss? Why is it difficult for me? Inbred female something-or-other? Something Grandma handed down to Mom and Mom handed down to me? (Probably.)

Whatever the reason, the flaw is serious. In writing a novel, in landlady-ing, and blogging. The same Em who fixes a leak with the "hide the flaw" artistry, commands herself to say what's on her mind -- no fudging, no hiding. Sometimes I stall a little, with an oops, eek, yikes, oh dear... but I re-fix what I write till it rings true in my own ears.
Posted by em's talkery at 5:00 AM

I love your leak-fix decorations. Your art is so fanciful, beautiful, imaginative, and useful.