HOW DID RACHEL MADDOW GET IN MY LIFE

She wasn't there last year. Suddenly, click -- she giving us news that interests us. Even now, when I'm sick and tired of hearing the same old things on all the channels -- Health Care, Trillion dollar spending, the latest percentages of who is supporting what -- Rachel Maddow says it in a fresh way.

And her angle on what's scary, what's hopeful -- it's unpredictable, maybe it's her tone or her choice of words. What she's saying doesn't seem to be just another version of what everyone else is saying, doing -- selling us, telling us over and over, until we're nodding, saying the words with them.

Dammit, the news is infecting, affecting the news. If CBS headlines the side effect from the cervical cancer inoculation, you can bet your bottom dollar that all the networks will be scaring mothers of teenage girls. And weather -- look out folks, the hurricane's heading our way -- and schools closing -- don't panic folks, but H1N1's already a pandemic!

And the daily clips of anti-Obama protesters -- THAT scares me. It's doubling, tripling the shouts, turning anger, ignorance, confusion into a wildfire.

Anyhow, for a week, I've been shying away from all the news shows, migrating to old movies. But last night JC got home at two a.m. from shooting a new "Law & Order Special 'Victims" episode. Maddow was re-broadcasting. While I stirred the grits, (JC's favorite bedtime snack) we listened -- her cool, calm, concise presentation of the day's events helped us unwind.

I did a speed-read research on her. What stuck -- Oxford Doctor of Philosophy degree, 36, California born, first openly gay anchor hired to host a prime-time news program in the U.S.-- unmarried, though she could be married -- she and her partner live in Massachusetts as well as Manhattan.

I glanced at her awards -- was surprised to learn she isn't an Obama supporter -- she doesn't own a TV set, but plans to get one so her partner can see her show -- was amused to learn in high school she described herself as a cross between "the jock" and "the antisocial girl."

Yay for Maddow! I like the way she describes herself as a "national security liberal." and "not a partisan;" like that fact that she objects to being typecast, that she's writing a book on the role of the military in postwar American politics 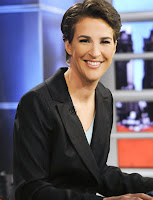 Okay ... All that stuff is impressive, but why I like her, I suspect, boils down to the way she looks.

I like her hair -- her minimal makeup, no eye shadow or visible liner around her eyes -- her neat but unimportant, not chic, or noticeable outfits.

I like that we aren't getting shots of her various curves -- she seems real, not what a makeup artist, manager, and producer have created.

Are you aware, like I am, that most of the women on TV news are more than averagely nice-looking?

I like R.M. because everything about her says ordinary grownup, educated, clear-speaking, clear-thinking PERSON -- not male or female -- she's a person I can trust.
Posted by em's talkery at 5:09 AM

I agree Em, R.M. is intelligent as well as a person that is genuine, that makes her worthy of our trust. xxxooo H.