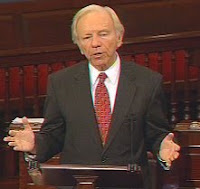 Well for one thing ... the guy blinks too much; also he keeps changing his mind.

And his Jewishness bothers me. (I'll explain why in a minute.)

I've collected words, sentences from what people are saying about him right now -- not pro and con -- all I can find is negative remarks.

RE "Jewishiness."
I'm Jewish (father an agnostic son of a rabbi, Mother irreligious till the year both my father and brother died), so it isn't race prejudice.

When Gore chose Lieberman for VP, my eyebrows went up. Lieberman seemed frail, weak, and wishy-washy even then, but I figured he was a practical choice for Gore, a way of getting the Jewish vote in New York Florida, and California. And in the Clinton/Monica Lewinsky days, Lieberman had a reputation as a voice of reason.

Progressives, quite a few Democrats can't stand him, mostly because they can't rely on him. (Maybe like me, they can't stand the lumpy, saggy insecure look of him.)

On "Face the Nation" with Bob Schieffer, Lieberman said, "I want to have health care reform, I want to be able to say yes." But when host Schieffer asked if his position could mean ending up with nothing, Lieberman said that was fine. He blamed the Democrats for putting the public option in the bill, when there was "broad bipartisan support" for a bill without one.

Chuckling, Lieberman responded -- "Well, the truth is that nothing is better than that, because I think we ought to follow, if I may, the doctor's oath in Congress as we deal with health care reform -- do no harm."

(Seeing a clip of that scene, I'm groaning -- he's cowardly -- he lacks conviction -- he takes a position, then he wriggles to to the other side of the fence.)

Senator Lieberman warned us -- he will switch families and vote with the Republicans to whack the Democrats' health insurance bill unless it is stripped -- the public option removed.

His support of McCain and the Republicans, should have cost him his chairmanship of the Homeland Security Committee -- some Democrats grumbled, others shrugged -- he was allowed to keep his gavel.

BIG MISTAKE -- I wish he'd been de-activated then and there!

And what about his wife, "Hadassah?"

The Lieberman family has financial ties to the health industry. During her husband’s 2006 reelection campaign, Hadassah Lieberman’s job as a "senior counselor" to Hill & Knowlton (a major lobbying firm), became a big issue. Her clients were in the pharmaceutical and insurance business. She won't say what she did for those clients.

In a press release, she declared-- "I have had a lifelong commitment to helping people gain better healthcare. I am excited about the opportunity to work with the talented team at Hill & Knowlton to counsel a terrific stable of clients toward that same goal."

Having earned $77 thousand that year, Hadassah quit, and since then, has refused to discuss her professional activities (though she's worked in the corporate health business for most of the past thirty years).

A few days ago, an 11/1 article in the New York Times said, "Lieberman's wife, Hadassah, is his most loyal supporter. She is not shy about urging him on when she thinks he's doing the right thing, or nudging him when she doesn't."

So -- if Democrats are disappointed by Lieberman’s threat to filibuster any healthcare reform bill that includes a public option -- they shouldn't be.

Here's a nasty tidbit from the "Dickipedia " (a spoof of the online"Wikipedia").

"Joseph Isadore "Joe" Lieberman ... is a former Democratic candidate for Vice President, an Independent Senator from Connecticut, a supporter of Republican presidential candidate John McCain, and a dick.

"Lieberman's strongest dick quality is his propensity to betray those who have been loyal to him. Whether it’s trading in his kind-of-Jewish first wife Betty for his super-Jewish second wife Hadassah, selling out running mate Al Gore on Meet the Press about counting crucial Florida overseas absentee ballots, or screwing over the Democratic party by campaigning for Republican presidential candidate John McCain.

"Lieberman has proven to be a world class stabber of backs. He probably only gets away with such treachery because he looks like the live action version of beloved cartoon character Droopy Dog."

Well ...
All his wrong choices .. all that blinking ...
Maybe he needs a new pair of glasses?
Maybe I do ?
But ...
He does sort of resemble the pooch in this picture.
Posted by em's talkery at 4:36 AM

Email ThisBlogThis!Share to TwitterShare to FacebookShare to Pinterest
Labels: current, opinion, private self