What's been happening in the continent of Africa is a nightmare. I picked this picture of a boy holding an apple because kids are hungry and "Apple" is providing jobs for many Africans. Apple's success is being touted in the media, inspiring questions and comments about why the White House can't do better for our country's unemployed.

Anyhow, in Africa -- oh my -- there's been a blur of unsolved problems, serious troubles, crimes in 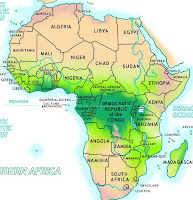 South Africa and other names and places on the African continent that I've heard of, but haven't been sure where they are -- so here's a map ----->

In Nigeria -- oil spills caused by Shell, Exxon-Mobil, BP, Chevron -- disease, filth, poisoned drinking water -- no one to talk to/write/call for help -- a black tide -- since the fifties -- a thick, gooey oil stain oozing over vast tracts of land and poisoning the air for millions of Africans --13 million barrels of oil --7,000 "spills," between 1970 and 2000 -- locals with sore eyes, breathing problems, skin lesions -- 2,000 oil-polluted sites have never been fixed or cleaned up.

In the Congo --many of the bad guys are the good guys at Apple, AT&T, HP the major electronics companies that manufacture laptops, music players, cameras, phones. Yes, the CEO's of these big companies swear they've got papers to prove that they don't buy "blood diamonds" -- minerals, raw metals that financed civil wars, militia atrocities in the Congo, where miners were coerced, for a pittance ($1 to $5 a day), to dig for metals that component manufacturers converted into capacitors and circuit boards.

"Oh no," say the good guys -- “All of our suppliers certify in writing that they use conflict-free materials. And we pay our employees in Africa, in comfortable clean workshops, with breaks and snacks, what everyone pays — if we didn't, we would be damaging the livelihoods of other businesses."

So is Apple paying employees $1 to $5 a day? Even if they're paying a bit more, with no health care, or social security, no wonder they're doing a lot of hiring in South Africa.

I haven't heard that anyone is pursuing this issue -- other shocking events in Africa have pushed extreme poverty, and possibly greedy employers out of the headlines.

In the Congo last week, there was sheer horror. The perpetrators of Rwandan genocide, and their pals, returned to punish the Hutu. Systematically, in groups of two to six men, they raped two-hundred women and young boys -- a four-year-old, and babies who were one-month, six-months, a year-and-eighteen months old -- gang raped them repeatedly in front of other members of their families.

Chopping off their heads might have been more merciful.

And what's happening in Africa, here, there, in too many places for me to specify, is NOT stopped, NOT noticed, NOT prevented. I want to cover my eyes, and not read what I've read. I want to shout at the electronic kingpins -- don't make any electronic stuff, don't import anything from Africa -- but gee, it's work for unemployed Africans who are trying to feed their kids, like the kid with the apple.

I'm shouting at myself -- stop writing this post -- what can you possibly gain? The oil spills, won't get fixed. The abusive treatment of the farmlands and homes and the lives of these people will continue.

So, I'm passing the details on to you, so you can help me figure out what to do. Does it mean don't buy Apple AT&T, HP, Shell, Mobil-Exxon, Chevron, or anything BP sells? Does it mean while we are seeing BP's constant, beautifully made ads that are telling us how well they are handling our problems, they are obscuring and bending, and re-shaping realty?

I am saying -- don't believe the ads -- believe the nightmare! And keep your wits about you as you're thinking about what's wrong with our country and what you can do to help fix it.

Thank you for bringing this to people's attention.

Hi Em, Fantastic article, I posted it on my wall and applaud you for writing this,as always you and I see things from a similar pair of glasses.
I support business and free enterprise, but Big business and Corporations is the current enitity that seeks to live at the expense of everyone else. The pendulum has migrated too far allowing Corporate power a position that undermines the needs of all business to responsibility protect the consumer that buys their products. Corporations as an eninity are displaying the characteristics of psychopath. Recommend reading a 'The New Yorker artical by Carl Elliot, Sept 6,2010, "letter from New Zealand,'Mind Game' offers some understanding of psychopathic behavior in a human being. xxxxoooo

I had no idea.

Not that I really WANT to read more, but I HAVE to know more about this. Can you link to some of the articles you've read? I'm going to do some more research.

Like you, I'm confounded. What to do when these companies are also seeming to help Africans by giving them jobs? What a mess. And as an Apple/AT&T, HP, and oil consumer, what do I do??

Thanks for shining a light.