FRESH OUT OF MONEY 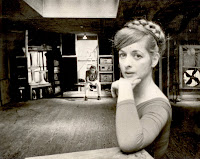 This is us, years ago.

We were in my "old" studio on the top floor of the building which we bought later on, and later turned into an attractive home..

JC didn't have a job yet. In the background, that's him with his head bowed, worrying about unpaid bills, as I was talking to the PR guy whom we couldn't pay, who was trying to sell a story about the Cullums to "Life" Magazine.

Even though we're much older and wiser now, and secure financially, and we both have good work to do, when I'm nervous, I'm like a child again -- like that day when we were behind in the rent, and I couldn't pay the $15-a- week rehearsal salaries for the eight dancers in my dance company.

My stomach was churning.

Click, and you'll find out how things got worse, when Mrs. Moglia called.
.