It's a vision, a horror, that I can't get out of my mind.

You Tube has videos of a 17-year-old girl being stoned to death in Iran. There are warnings before you click "start," that say the video is shocking.

It is shocking, but not very, very unbearably shocking.

Perhaps it would be more shocking if we saw the people who watched the stoning, the looks on their faces, the reaction of woman's family, the rocks -- someone picking up a rock and throwing it -- the look on his/her face. Maybe if we saw the family related to the man with whom the girl sinned -- if we saw their faces, their hands clenched or unclenched.

We just see a slender girl/woman -- no face -- no details. She appears to be sitting on the ground. Then, we see her stretched out on her side with an elbow bent -- we wonder if she's still alive. There's no movement. She's probably dying or dead.

What I saw left me empty, very, very tired.

Earlier this month, the Court in Tehran, Iran ruled that a 25-year-old woman, Maryam Ghorbanzadeh, convicted of adultery, must be executed despite her pregnancy.

Well ... there's good news -- her lawyer hopes to have the sentence 'commuted' to lashing.

At Tabriz prison, alongside Ghorbanzadeh, is Azhar Bakri, 19, who was also sentenced to death by stoning after being convicted of adultery. Bakri was jailed four years ago after her husband, whom she married at 14, accused her of having an extramarital affair.

For many months, the case of 43-year-old Sakineh Mohammadi Ashtiani has made headlines. Convicted of adultery in 2006, sentenced to death by stoning, she may, reports say, be lashed instead. There were reports saying she already received 99 lashes. Then, more recently, there were reports denying that she has been lashed.

Good news -- Ashtiani's lawyer says there is a chance the sentence would be changed into death by hanging.

The International Committee Against Executions (run by Iranian ex-patriots), vehemently denounced the verdicts and called for the immediate rescinding of all similar death penalties. They claim Tehran has rescinded 13 death sentences against women.

Ashtiani's cause was taken up by prominent figures as varied as Sen. John Kerry, Lindsay Lohan, the Norwegian office of Foreign Affairs, Colin Firth, Emma Thompson, and British foreign secretary William Hague, who called stoning a "medieval punishment" that, if carried out, would "disgust and appall the watching world."

Ashtiani's children, 17 and 22, have sent letters to other Iranian human-rights organizations and received more than 10,000 e-mails about the case.

Yes, we have to protest, send emails, find ways to stop it, argue, discuss -- in our civilized clothes discuss with Iran's President, Mahmoud Ahmadinejad in his civilized clothes -- things nuclear, American tourists jailed as spies, and his "there was no holocaust" theories. 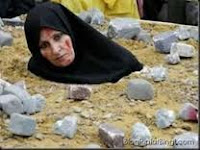 to think or feel anything but a huge weight -- that we live in the 21st century, and women are stoned to death -- that women, like some poor animals, not humans who stand side-by-side with men, are destroyed brutally, horribly in a way that gives some kind of pleasure to others -- that a woman is a disposable creature.
Posted by em's talkery at 4:06 AM

Every society, every culture, every generation has some "disposable creature" -- since the very dawn of time itself. You'd think humans and human society would have evolved by now. You'd think that we would have grown to the point that we can function in a societal unit without a myriad of randomly selected scapegoats. I know such things while I silently watch folks who don't read history books or read the news tout hope and rainbows and brighter tomorrows -- rallying that "we shall overcome." How can anything possibly change when, in general, human society doesn't like to analyze its own history? I'm not always sure that "hope for the future" are words in my lexicon anymore . . . I wonder sometimes if that's a bad thing.

I can't bring myself to look at any videos like that. All I need to hear is "stoned" and I freeze up inside. It's unthinkable this sort of thing still happens. Then again before this week, I'd have found it unthinkable that so many teens were killing themselves as a result of vicious bullying.

I guess killing or abusing women for adultery is the real horror - the stoning is what makes it seem so medieval, but any form of torture is horrible.