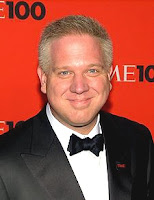 I am sending you my heartfelt congratulations, celebrating that soon you won't be on Fox TV.

Hooray -- you haven't been fired, but yay -- you won't be re-hired. How and when they are phrasing you out isn't clear, but the reason -- that 400 sponsors withdrew their potential support -- that's fascinating. It means your "art" as a TV celebrity, your thrill-chill power as a spokesman has actually been diminishing even as you are getting stronger, and more uniquely YOU.

Yes, you have become, perhaps, too much of an "artist." With your painting, designing, creating, decorating, performing and entertaining while displaying your views of reality, you've been doing what you do -- selling the Glenn Beck vision of the world. And promoting it better than ever!

Previously, when I wrote you fan letters, it bothered some of my friends that Em' Talkery, a strong supporter of our current White House, would salute you. But gee, I'm impressed, fascinated, by the growth, the deepening talents of a celebrity like you -- your theatrical gifts that enable you to distort ideas and ideals so blatantly, so brilliantly.

Soon, ala Rush Limbaugh, but on your own Mercury Radio Channel, you'll be providing rumors, gossip, suppositions -- hours and hours of background noise -- for the millions of Americans who tune in to tune out of their humdrum lives.

I know we'll be hearing more about your Wall Street and Health Care reforms; your practical solutions for reducing the size of government, along with your strategies for handling Nuclear threats, and our wars.

The Beck vision of Democracy -- the Beck concept of what the world of today needs to be -- will definitely inspire the rebels, the protesters, the young folks in the middle east, who are fighting for the freedoms we take for granted.

With your wealth, your homes, your investments and your website "Blaze," and its "Naked Emperor News," you've got more than enough money, and potential ammunition. Why right now, today, even as I write this fan letter, I am exhilarated by the "Blaze's headlined message -- "Sometimes violence is better than no violence."

Gee, maybe violence is what we need?

Since your "Restore America's Honor" rally last summer, and the way you are expanding -- getting bigger and more powerful every day -- with your anti-Nigger, down with the Jews views, and your artistry -- your promote wealth, stealth, spying, lying, saying whatever you need to feed the greedy breed that wants a total rewrite, a civil war fight -- holy cow, wow! NOT being rehired, being semi-retired gives you more time for your radio shows! What the heck -- it's great news for Glenn Beck!

Did you see the John Stewart show where he announces the end of Glenn Beck's show. Stewart dedicated his whole show that night to a hilarious imitation of Glenn Beck announcing doom and gloom.