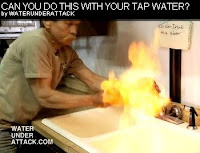 That's what's been happening to home owners throughout the country, who sign contracts with companies that are "fracking" through bedrock to reach natural gas.

The arms and legs of a giant (Halliburton), operating under other names of various natural gas drilling companies, are wending their way into your very own backyard, and poisoning your water. They are buying the right to proceed with "fracking." in Pennsylvania, West Virginia, Colorado, Wyoming, Michigan, in Texas and Louisiana, and in the Catskill/Delaware watershed, which supplies all of New York City and Philadelphia.

Pay attention -- this is serious!

F-r-a-c-k-i-n-g is a petroleum industry technique that pumps large amounts of water, sand, and cocktail of chemicals, including benzene and toluene (paint thinner), underground, at high pressure to open fissures -- build up enough pressure to fracture the bedrock and release the gas trapped inside.

The people who signed the contracts are now, mostly, using bottled water, but they're still getting sick. In Wyoming people are reporting headaches, nausea, itchy skin, dizziness, and difficulty breathing. Again and again tests prove that gas drilling puts contaminants in the air. And even when the readings says that formaldehyde levels, are hot -- red-hot and deadly -- they are rationalized away in the company's favor by state and local agencies..

Furthermore, the natural gas companies have started trucking in workers (some of whom worked on the oil rigs during the Gulf crisis), to counter the protests of concerned citizens that are saying no to fracking.

Under federal law, companies aren't required to reveal the chemicals they are pumping underground. The only restriction the Environment Protection Agency has issued is that "Frackers" cannot use diesel oil.

It's a loophole big enough to drive an oil truck through. Thanks to the Bush-Cheney era's accommodating legislation, Frackers can use other compounds that have the same toxic chemicals as diesel. They aren't even required by law to list their toxic ingredients.

So people are getting poisoned.

You can drink bottled water, sure -- but you can't buy bottles of Evian to maintain a herd of cows.

How do we stop this? What can we do? Write or call dmulligan@democracyforamerica.com. DFA is a watch-dog group founded by Dr. Howard Dean, former chairman of the Democratic National Committee, a man the White House trusts. (802) 651-3200 ext. 115. Sign their petitions.

Most people don't realize what's happening. This film clip tells the whole story. Get your friends to see it, and pass it around.