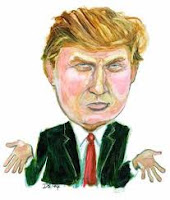 Last month, this guy said he was thinking of running for President because it was a disgrace, the way our country was going to the dogs -- the Chinese were overtaking us -- "Let's face it," he said, "We are no longer number one in business like we used to be."

Now he's claiming/exclaiming the "birthers" are right! Where's Obama's birth certificate? Obama's wrong in Libya, wrong economically, wrong culturally -- everything in America's falling apart because Obama's the worst President we ever had, and he's not a real American.

Are we listening and watching this guy because T -R - U - M - P is engraved on a bunch of buildings? Trump's a 100% all-American, white, limousine- riding TV celebrity -- rich, remarkably recovered from bankruptcy. Also, he's got those gorgeous, girlish-wives and great-looking kids, and he's selling and bellowing out facts that don't sound unreal, do they?

Oh my golly, could he end up being the Republican candidate? Oh no -- it can't happen -- gee it could happen -- it's a free county -- freedom of speech -- we're thinking as we stare, stare, stare at his hair.

Trump may have certain qualities that are right for running a business, but he lacks the tact and diplomacy required to make him President. He's not afraid to say what's on his mind, which is admirable to a point. But the POTUS isn't able to fly off the handle.

He's probably laughing at us all for talking him up so much; this will only help his ratings.