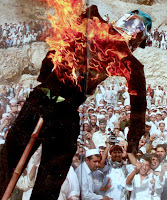 With pictures (like this one), of the Preacher being burned in effigy, a few weeks ago, the protest was mentioned a few times in our news. Right now, except for the families of the dead, it's more-or-less a forgotten fact that's filed away in the mind of Preacher Jones as a success.

Last year, before September 11, Jones promoted an International Burn A Koran Day. Threatening to burn a Koran every day, he sparked wild protests around the world. It was only after the intervention of both the President and Defense Secretary Robert Gates that Jones withdrew the plans, claiming he did so because he had made his point, and vowing not to go through with it.

But ON March 20th, he changed his mind.

To me, this man's burning of the Koran is a misplaced, distorted passion for his own religion and his own beliefs in the Lord God.

I bow my head, and mourn the people who died. This post today is my plea -- don't disrespect Muslims -- don't make war with them -- don't let it become our bible versus theirs.

Please don't dismiss the fact that 20 died because a preacher burned a Koran.

I am hoping my voice is yours too.
Posted by em's talkery at 4:00 AM