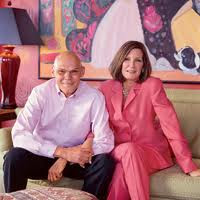 James Carville's Jack o lantern grin, shiny, teasing eyes, the fun in the guy -- he reminds me of me. And thinking along those lines, his wife Mary Matalin is sort of similar to my husband.

She's consistently, reliably a Republican, and James is thoroughly, unwaveringly, a Democrat.

I'd been reading an essay by James, that he wrote for Newsweek, about his "Favorite Mistake," a book he wrote in 2009. He explained that as he finished the book, Barac

k Obama was heading for the White House and his political party was riding high, so he called his book it "40 More Years: How the Democrats Will Rule the Next Generation." It was an interesting title, all right, but a big mistake. Though it was published by Amazon, the book bombed.

What fascinates me, whenever I hear about Carville and Matalin, is how they've managed to stay married, despite their totally opposite politics.

They married in 1993. He's her third husband, They have two daughters, one studying law, the other finishing high school. The Carvilles say they do not talk politics at home, though they have appeared together, on opposite sides of the fence, in talk shows..

Matalin wrote the best-selling, "All's Fair: Love, War and Running for President," with Carville and co-author Peter Knobler. Matalin and Carville published "Letters to My Daughters," in 2008. They now live in New Oreleans, and both teach at Tulane University.

James is nine years older than Mary but she seems older somehow. She has a stern, tough, farmer-like presence. I can picture her shoveling snow and moving furniture.

Who does the dishes? Who cleans the house and takes out the garbage? Which one of them fixes computers, and who does the shopping? I think after a couple has been married for a while (the Carvilles have been married 18 years), they're a seesaw -- one goes up as the other goes down, and then the one that goes down changes places and goes up, and the other is the low body on the board.

There doesn't have to be an "I do this -- You do that." In our family, I am the icon smasher. JC is the conservative. Politically, we mostly agree, but I jump to conclusions and get angry -- "throw so-and-so out the window," while JC rarely throws people, or ideas or things. out the window.

Yes, I'm the thrower-outer and he's mostly a keeper.

Do you have to fit neatly, compatibly with your partner? I think NOT fitting makes for a more interesting compatibility -- we are not pieces in a puzzle that have to fit, otherwise the puzzle can't make a picture.

Yep, Matalin and Carville make a nice picture -- colorful, and interesting,-- a fun picture like JC and me.
Posted by em's talkery at 4:00 AM

I always smile when I read your posts and comments. Different views are fine in fact, natural. They're all part of the whole. THis couple looks wonderful.

I really enjoyed following Carville and Matalin back in the day. At this point, however, I think their public personas have become less interesting. We went to a "performance" by them a couple of years ago, and it was boring, not funny at all.