"You won't watch the awards tonight?" Our friends ask, when I turn down their invitations to come to their after-the-awards-show parties.

"No, it depresses me!" I blithely explain.

"You're a weird one, Julie Jordan ... " I sing the song from "Carousel," telling myself I'm worse than the "queer one" as per the lyrics.

JC laughs, but understands. It's not just the glamorous names, fabulous clothes, red carpet, and memories of us sitting in limos, waiting in a limo line until our limo was told to pull up. It was 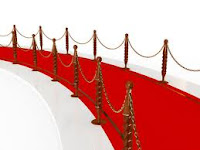 depressing when we emerged, and the various TV announcers called out John Cullum's name, and I observed fans staring at me, shrugging, turning away because I was not somebody.

It's even worse, being at the ceremony, sitting in special aisle seats in case JC's got to rush to the stage. And nowadays, watching the show on television, my feelings for the winners and the losers make me intensely aware of me in my performer days.

I find myself wondering what I could do to get more attention -- be better known, be more famous, and that is NOT good -- it's wrong, distracting-- instead of doing the work of my work, my mind is on what I could write about that would please more readers -- whoa -- that is a big loud no!

A painter cannot paint well if he's thinking about what other painters do and why they're famous. An actor at an audition has to focus on the who-what-when-where-why of the part he's playing, not beating out the other actors waiting their turn, not winning the part, or impressing the director.

In writing, I have to stay focused on what I'm feeling about things that are going on in the world -- not my personal, private successes/failures in my former-career- world, the dance world -- the real world.

It's not weird -- that I need to avoid show biz things -- that I have keep away from my performer self. What makes my writing exciting and important to me is what I manage to convey.

So this post about why Em avoids awards shows -- apply it to yourself.

What is the work of your work? Does the evening you spend watching the movie and music stars leave you peppy, or does it make the work you have to do tomorrow seem unimportant, ho-hum, tedious?

If it inspires you -- each year there are more and more award shows turning people you never heard of into somebody in the limelight -- do something marvelous, outrageous, uniquely special and next year it could be you!
Posted by em's talkery at 4:00 AM

This makes perfect sense. We can't all be rock-stars... Or can we? As a writer ( an exceedingly gifted one to boot ) you can be whomever you'd secretly like to be. You can write yourself into anything. It's actually a blessing. I've been in the limo too... Waiting for our turn... And being brushed off by the expectant crowds. It's a little off putting... Especially as a teenager whose worked so hard to get ready for the monumental event... But we learn as we grow up that to each comes his or her own. Don't be too quick to assume that people aren't interested in you my dear... And if they aren't interested... To hell with them. ;)

I don't watch them because I can't bear the cliches: the host making lame jokes, the "presenters" trying to look spontaneous while reading from a prompter, the ludicrous musical numbers. And the whole idea of competition between artists is ridiculous. What basis for comparison is there between two actors playing different roles, for example? The whole thing is just a way of milking more money out of the public. I can't stand it.

How very wise and level-headed, Emily. There's too much emphasis on being a "STAR" and not on being an ACTOR or SINGER or DANCER or MUSICIAN.

I admit I watch the Oscars, the Tonys (there's a party!) and the Emmys if I'm in the mood. I've even attended a dress rehearsal for the Tonys and that sort of shattered the illusion for me - it's a ceremony for TV, not merit.

The only awards ceremony I truly love is the Theatre World Awards - not televised, informal and there's a genuineness and warmth lacking from all the others. I've gone every year since 2004 and it's the one theatre award experience I really look forward to every season!

How very wise and level-headed, Emily. There's too much emphasis on being a "STAR" and not on being an ACTOR or SINGER or DANCER or MUSICIAN.