WHAT'S IN A NAME

We're going to make you the Maria Callas of dance, said Matthews Napal, my agents, as I was off on a tour to South America. To perform Mahler's Fifth Symphony, a solo for symphony orchestra, in Medellin and Buenos Aires.

The agents changed the inflection, the pronunciation of my last name was FranKEL, not Frankel, emphasis on the first syllable. They were sure people were going to be giving me standing ovations, shouting my name. Fran-KEL was shout-able. Frankel was boring. And sort of Jewish sounding -- they didn't say that but I sort of wondered.

Around that time I was popping over to WQXR. (Bob Sherman, the boss (not sure what his title is but he's a kingpin there, has been for a long time) -- he'd interviewed me once or twice. When I described, hummed and sang some of the music that was being used for my "Medea," Bob was delighted. It was complicated modern music by Alban Berg, and I described the movements that the anguished jealous Medea made as she murdered her sons, using dancer language -- a mixture of words like "my left leg in a turned in arabesque, then a stabbing developé front, swirl turn, a double, suddenly becoming zig-zag leaps." It was fun, that broadcast. almost like rehearsing.

I was excited and pleased when Bob called and said, hi, let's talk about you coming in and describing your Mahler. I politely reminded him..."by the way, I'm calling myself Emily FranKEL these days...

Suddenly there was a silence.

Fran KEL, he repeated with an icy question mark in his tone.

When I explained why, he said, "They don't want you to sound Jewish." When I sort of laughed it off, and explained that they had my best interests at heart, like standing ovations and such, the conversation ended.

Bob Sherman didn't hang up. But he didn't invite me back to do any more interviews. His last name, "Sherman" is definitely a Jewish name.

(I haven't heard from him in a very long time, till today when he called Sue, our PR person to thank her for telling him about The Readery.)

Times have changed. It doesn't seem very important anymore, whether you put the emphasis on the first or second syllable, but even now, I say my name quickly, flatly, avoiding any emphasis. Which is actually tricky. I say it twice sometimes, each time a different way, ever so slightly embarrassed at the good reasons and bad reasons that they tinkered, we tinkered, I tinkered with my name.
Posted by em's talkery at 11:21 AM 1 comment:

Email ThisBlogThis!Share to TwitterShare to FacebookShare to Pinterest
Labels: dancing, private self

I used to have a diary. I started it with Dear Bobby...(Bobby Fine was a relative, about 18 when I was 11, handsome, tall, and he paid attention to me, acted like I was important which was important to me). I kept writing in it daily for many many months. I was determined to be a dancer and wanted to go to New York City and study ballet at the School of American Ballet which had pictures of it and some of its students, in "Life Magazine."

When I went to New York that summer, to live with Aunt Minna in Queens and study at Boris Novikoff's Ballet School at the Metropolitan Opera House, I stopped writing. I was in it, fulfilling my dream, and struggling with unexpected nightmares. Aunt Minna and her husband were saying nasty things about my parents. A scary thing happened on the subway traveling to my ballet classes -- at rush hour, a man tried to touch me under my dress. Then I moved from Aunt Minna's to Mrs. Merriam's boarding house, which was closer to the school, but extremely lonely, and I was always hungry. Though my parents gave me an allowance, I had only twenty cents a day for a midday snack at the automat -- a corn muffin. And my Achilles tendon in my right foot had started to ache from doing "point work," and a serious problem was developing that was going to endanger my future as a "great dancer."

All the details of that dream, the tendon, Mrs. Merriam's, loneliness ... the next things that happened on my way are burned in my mind.

I don't write daily diaries, or logs anymore. I wrote a daily something on my computer when I got my first computer in the seventies. It was an Exxon. (Hardly anyone had a computer back then). I used my daily log on the Exxon, to express/list/ assemble what was on my mind, worrying me, depressing me. It became a complaint list. And gradually I realized that the writing in my "wklog" (that's what I called it) was interfering with my real writing which was working on a book. It was "The Woman" back then, supposedly a story about Claire Booth Luce whom I was turning into me.

Turning into me ... me turning into her. So the hundred thousand Emily stories, events, inner snapshots, all those memories of dancing, booking tours, traveling, hoping, waiting for phone calls, writing letters, meeting people, performances, living ... just living ... are in a place I don't want to visit except when I'm writing a book, using myself. Using me dressed in the clothes, the dreams, the thoughts of a character I evolved in order to tell/write/make a story ... that's My Secret Place. No. I don't want to go to my secret place and write about me. That's for my new novel about Leah, the DANCER I'm working on ....
Posted by em's talkery at 10:36 AM 1 comment: 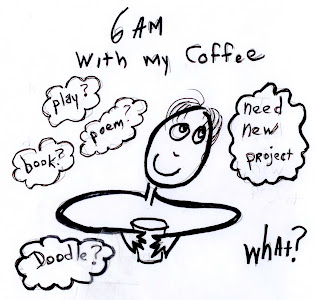 I like to get up early and write before my guys are up. Lay out the breakfast things, but greet them. (Both are named John).

I've developed the habit of leaving a doodle for them, a quick picture of my state of mind---am I up or down, feeling wonderful? Powerful, or fearful--fretting about something.

I'm still sort of sleepy, wondering what to do....
Posted by em's talkery at 6:06 AM No comments: