CULLUM ON "CIRCLE OF IVY" A FAT LADY

John reads the opening chapter of Emily Frankel's novel, which bluntly, realistically tells the story of a fat lady jeopardizing her life by excessive dieting.

Hey, almost nobody is buying my e-books -- my six novels are just sitting on emilyfrankel.com. 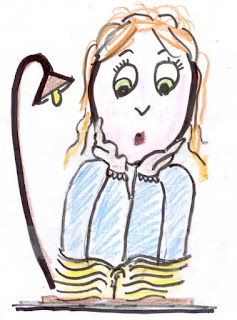 Gee, the titles are good, book-covers are good!! The plots -- gee -- they're very good stories. My writing has been praised by critics ... Lotta friends on Facebook and Twitter read my blog ; they say they like my ideas, my humor, my honesty. Why aren't they buying a book?

I dug up facts hoping to comfort myself. According to Pew Research: One out of 10 American adults, 72 percent of adults, read some kind of book last year. That's a steep decline from 1978, when 92 percent of Americans made that same claim. But when e-books exploded into popularity -- driven by the launch of the Kindle in 2007, the Nook in 2009 -- books sales jumped from $61.3 million to $1.54 billion, and  e-books accounted for an increasingly large share of the total trade revenue. Pew and Gallup say the revenue from e-books has been "flattening" -- end of last year e-books totaled $1.37 billion and accounted for not quite 20 percent of total revenue.

Numbers dumberate me! LOUDLY I'm moaning -- I am, I am -- I don't write novels to study percentages, market shares, I don't really care about money. 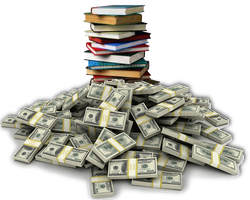 Okay, audiobooks are getting popular. Researchers said they accounted for the strongest portion of adult book sales in  2015, bringing in $205.6 million, a 38.9 percent increase from 2014. My husband, John Cullum, who has a voice that thousands of fans love, wants to record my books.

Hey ho, haha -- I haven't been able to sell my e-books! Even with Cullum's name, the same thing will happen with audiobooks. Gee -- if I could just get my books in a store window, I'd post this sign. 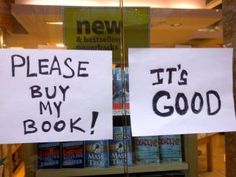 Hey, here's a video that a critic who wrote a book published. It sums up my moan perfectly.