Are you sitting at your computer with a phone, iPad, iPod, tablet, or notepad? 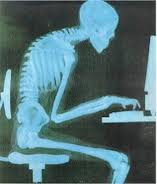 Or are you seated on a couch with a printed something-or-other as the TV is blaring news, gossip and ads?  Are you seated  at the kitchen table, dining table with something to eat?

Even if you're out in the world, visiting, conferencing, waiting for doc, lawyer, accountant,  or friend -- you're relaxed, kinda taking it easy with furniture supporting you.

Probably your back is rounded, and your head is thrust forward  -- yes, you're an S.

In fact, everyday, most of the day you are an S, not an up and down vertical body.

If you don't fight it, you'll lose it.

Be tall every time you get up to get anything, every time you head for the bathroom, or go into another room  -- chin high, fold your hands behind your back as if you're pacing. And smile proudly, inwardly -- be jolly, perky, peppy  like ... A lollypop, and keep singing the song as you sit back down.


And try a bit of exercise. It's very easy.

WILL 'FUSION' CHANGE OUR WORLD?

Hey, wow, gee -- a life-changing, VERY big deal is brewing. Instead of splitting atoms, we are working on fusing them.

Fusing? Yes, squashing them, forcing them together, making small particles into one big one.

Fusion is being played with by various companies like Tri Alpha Energy, who built a giant flywheel in an Orange County, California parking lot. It's a reactor -- it's so big and powerful that it has to be disconnected from the public grid when it is turned on, or the whole country would be shorting out. Here's a photo of it. 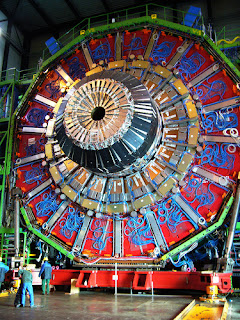 We've heard about reactors when they leaked and endangered the world. The reactor at Three Mile Island leaked in 1979, and created our country's worst nuclear accident. There are several dozen reactors in the world, in various stages of completion, built mostly by universities, large corporations, and national governments. The largest one -- the International Thermonuclear Experimental Reactor (ITER) -- is under construction in the south of France.  It is scheduled to be running by 2027. It will cost about  $20 billion.

Over the past 10 years, various companies, like Tri Alpha, have been secretly working on Fusion with the help of risk-taking investors like Jeff Bezos of Amazon, Peter Thiel, PayPal co-founder, Paul Allen, Microsoft's co-founder, along with super-rich Goldman Sachs' clients.


All these guys are looking for an energy source so cheap and clean and plentiful that it would change human history. Michl Binderbauer, age 46, Tri Alpha's brash, youngish founder and chief technology officer, who is "charismatic, radiantly self confident," according to reporters, has bragged and said "My company is the best private Fusion Company today."


Scientists have been working on Fusion since the 40's. It is NOT "Nuclear Fission" -- the power that we have today which involves splitting atoms like uranium into smaller atoms. Fission releases a lot of energy, but Uranium is scarce, and nuclear plants are hazardous. Do you remember the reactors leaking in Chernobyl -- destroying the town, the people -- the entire area in Ukraine? In Japan, radio-active water continues to leak from the 9.0 earthquake that damaged reactors in Fukushima. It left that country with toxic waste that will stay hazardously radioactive for centuries.


Good fact about Fusion; as it forces small atomic particles together to form bigger ones, the process releases a huge burst of power. If something goes wrong, fusion reactors don’t melt down -- they just stop. They produce almost no radioactive waste -- no pollution -- just helium, like what's used to inflate the balloons.


Major Fact: Using fusion, the lithium from a single laptop battery, plus the hydrogen from 45 liters of water (about 12 gallons), could generate enough electricity to last  for 30 years.


Fusion will certainly change life on earth, but right now, getting enough heat to make particles fuse is still an unsolved problem. Also, the fuel that's created from fusion is in the form of a plasma that's wildly unstable. Scientists haven't yet figured out how to confine it -- anything that touches it instantly vaporizes.


Michl Binderbauer recently announced that he is tearing down Tri Alpha’s current reactor and building a new reactor that will be able to create the necessary temperatures. Explaining that particle accelerators can create temperatures in the trillions, he told reporters, “Going to higher temperatures is not that hard. You use techniques much like what you use in a microwave. They’re very similar principles.”


Bill Gates is currently on a global campaign trying to raise awareness about our addiction to energy -- how it is destroying the environment. Putting $2 billion of his foundation’s money into it, Gates said, “We need an energy miracle."


No doubt about -- the miracle might be Fusion. A lot of very smart people are betting their money and careers on it. Fusion may just turn out to belong to that category of human achievement, like powered flight and moon landings.


Sooner or later someone will do it --  it could be Michl Binderbauer.  It could be that $20 billion ITER in France.