I belong in this picture.

When my older sisters were playing cards, I wanted to join in. When they said no, I stood there and peeked over their shoulders. Maybe I smiled, or giggled a little, or made a quiet "ohh" sound.

"Don't kibitz!" said my older sister Miriam, not sweetly. Of course I listened to her -- I admired Miriam more than anyone in the world -- she had wonderful books that she let me read after I washed my hands. Also, Miriam could draw and she lent me a piece of paper from her art book and gave me one of her charcoal sticks. That's how I learned to draw.

Sometimes, when my cousins Herbie and Bobbie visited, they did crossword puzzles. They didn't mind if I kibitzed, but when Bobbie's father, my Uncle, taught Bobbie how to drive, I was banished from the car and told: "Never kibitz, never distract the person behind the wheel or tell the driver what to do."

That stayed in my mind.

When I was in the car on my way to do a TV interview in Indianapolis, before my performance at Purdue University that night, Purdue's public relations director was behind the wheel. It was snowing. We were on a four-lane highway. I saw that the snow was sticking to the ground. I wanted to tell her to slow down.

She was chatting, doing 55 mph, one hand on the wheel with her elbow on the driver's window panel.

I fastened my seat belt with an elaborate gesture, murmuring casually, "I hate seat belts. I guess this snow is making me nervous."

As the seat belt clicked, she started passing a truck. I saw the speedometer at 61. Suddenly the car felt as if it were a plane.

Bang. We hit, head on, a tree in the road's center divider.

My face slam into the dashboard. I heard her moan, "What are we going to do?"

I comforted her with reassuring words about someone noticing us, someone finding us. I don't know how many minutes passed. It felt like hours till I heard sirens, and saw men opening the car door.

Somebody said, "Don't move her." They meant me. "Put her on a board." They put me gently on a board.

Then, I was in an ambulance on my way to the hospital where they take (someone explained) drivers who crash in the Indy 500.

When somebody cut off my grey coat, I remember saying, "This is my most chic, most favorite coat. I bought it at Lord & Taylor. I have to dance tonight at Purdue University. How long is this going to take?"

Two days later I woke up in an intensive care unit. My face was bandaged. I couldn't move from the waist down. Somebody said my back was broken.

Years later, after I learned to pee, to walk, to dance again, I learned to say slow down, give orders and politely, honestly, meticulously tell people what I knew they needed to do. A leading dancer, choreographer, director is a major kibitzer.

Nowadays, I have a very hard time telling NYC taxi cab drivers to slow down. I do enjoy kibitzing with my husband. as we watch fellow actors in movies or TV shows and commercials. We direct them, scold them, tell them "you're overacting -- stop mugging -- you're stiff -- you smile too much."

I don't have a had time, when we're watching the news on TV, and the screen breaks into two or four sections and celebrity guests voice their opinions, telling the President what he ought to do. 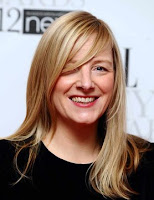 What a job -- to be the voice, the eye, the taste of Alexander McQueen -- be a girl/woman/boss in YOUR thirties, that everyone in the world of fashion knows, probably envies, certainly admires.

The dress Sarah designed and supervised -- spent hours and hours over every inch of fabric, seaming, stitching, and fitting, molding it to Catherine Middleton's body -- that fabulous wedding dress which transformed the lovely Kate into a perfect princess, also transformed Sarah Burton into a major name in fashion.

Sarah Heard Burton (her husband is the well known fashion photographer, David Burton) was born in Cheshire, England, one of the five children of Anthony and Diana Heard. She attended a girls' school in Manchester, took art courses at Manchester Polytechnic, and pursued fashion at two other art and design colleges in London. In her third year, her tutor, a friend of Alexander McQueen, got her an interview and she became an intern for McQueen.

After McQueen's suicide in February, 2010, the company owner, Gucci, named her the creative

director of "Alexander McQueen." In September of that year, Sarah B. presented her first collection at the prestigious Paris Fashion Week.

In November, 2011, she was chosen as on the Designer of the Year at the British Fashion Awards.

Since McQueen's death, designer Sarah, always referred to as Sarah Burton for Alexander McQueen, has presented four runway collections, each one more daring and well-received than the last.

More than likely, you, as well as millions of people all over the world have seen photos, or watched Kate's and William's wedding and were fascinated, and impressed, by the fantastically perfect look of Princess Kate in her Sarah Burton for Alexander McQueen wedding dress.

Fashion journalists, as well as Sarah B. herself, say the creation of that wedding dress was "An experience of a lifetime."

Where's this designer heading? What's next for her? 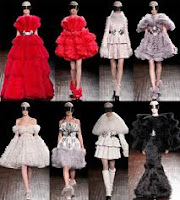 I saw photos of some of Burton's recent creations that got critics gushing, raving, about women "like pom poms," "underwater anemones" and "bauble decked Christmas trees."

Sarah said -- "Inspiration came from the rippling underbellies of mushrooms, and other woodland imagery. I wanted to be very positive. It is about a beautiful future." One it seems, that's just as bright as her own.

Will we see women bedecked like this? On red carpets, probably. we'll see celebrity beauties who are determined to be noticed.

I have to say, "YAY Sarah," but please, take us out of the woods, and give us something to stop traffic in broad daylight, something that allows us to mingle, kiss, and pee.
Posted by em's talkery at 4:00 AM 4 comments: Whatever you REGRET - be it harsh words you uttered, a lie, letter, phone conversation, vow, promise, an infidelity, or a choice, a decision you made -- it's a pothole in your mind.

You get stuck in it, spend a lot of time mulling it over.

Do what I do! The real me, Dr. Em, ex-dancer, novelist, blogger, John Cullum's wife says:

Pick a pretty color and carry it with you wherever you go. Whenever a regretful thought pops into your mind, write it down -- scrawl a word or two or write a paragraph that will ring a bell when you see it.

Once REGRETS are in your note book, when the woe-is-me thoughts pop into your mind, open the notebook. Look at it, skim what's there on the page, instead of mulling things over again and again and again.

Regretting is heading backwards into the past.

Make a Job, Career page. Put down stuff you've been telling yourself, like "I'm in the wrong

Then, REVERSE it -- remove, erase, excise too old. Lop off 10 or 20 years. Consider what you'd like to do; what skills to acquire, what you could study, and names of people to whom you could talk. Write down on a page, even vaguely possible possibilities.

Do an Age/Weight/Me page --include all the bad stuff -- you're over the hill, you've got health problems, you don't have energy, etc.

REVERSE the negative, item by item. Out loud, declare I am not over the hill. My health isn't stopping me! I've got energy! If you are overweight, asthmatic, diabetic -- whatever ails you -- if you're disabled and you want to go for a walk, ride a bike, dance -- just REDEFINE what going for a walk/bike/dance is.

DO A SKILLS, SELF -IMPROVEMENT PAGE.
Wish you could teach? help the poor? take care of pets, travel, write a book? be an actor? Whatever you wish -- make a list on a separate page.

Make a sub-list -- put down what you need -- college degree, a person to contact, a starting point.

Make a CONTACTS page. Names, phone numbers. Make a sub-list for volunteer work -- things you could do for NO pay

Okay, suppose you're out of money.

REMOVE/ REVERSE this reality. Create a list of the number one, first, most important things you'd like to do. Sub-list all the ways you could acquire money. Once this stuff is in your notebook, lack of money doesn't divert you, stop you, from figuring out possible actions.

Got a LOVE problem? Put it down --are you stuck, do you have an unbreakable commitment? Make sub lists of what you could do if you were free. It'll be a revelation -- there are plenty of things you can do.

With a notebook and lists -- reversing, lopping off years, removing negative concepts, and restrictions -- you will get fresh ideas about what you can do today.

The guy who invented the telephone, Alexander Graham Bell, said. “When one door closes, another opens; but we often look so long and so regretfully upon the closed door that we do not see the one which has opened for us.”
Posted by em's talkery at 4:00 AM 6 comments: