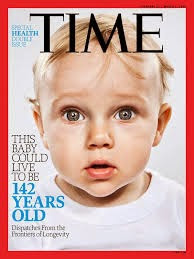 New: RAPAMYCIN. Scientists say it slows down ageing in humans like it does in mice. Guys who have been taking it have livers, hearts, and tendons that act like they're much younger.

Rapamycin halts mTOR -- the gene that tells cells what to use for energy. If you eat a lot, this gene gets your cells absorbing nutrients. If you don't eat a lot, the gene slows down, even halts cell-growing, till the next time you eat.

This suggests that restricting how much you eat helps you live longer. Furthermore, studies of mice have showed that smaller mice live longer. Larger mice developed cataracts; some got diabetes.

New: TELOMERES -- a newly discovered enzyme that regulates your inner clock is being studied. Blood is now being investigated for GD11 (a protein), and KLOTHO (a hormone). They are both elements in younger mice that seem to rejuvenate older mice. Apparently mice with more Klotho and GD11 live longer.

In California, the Buck Institute for Age Research said: “Further studies on higher organisms will allow us to answer whether or not we have to reconsider aging as an inevitability.”

In Great Britain there's exciting news about a tiny worm, the "Caenorhabditis Elegans." It normally lives only 20 days, and  curls up and dies. Top scientists  have said that they have doubled this worm's life span by using a "simple drug" -- oxygen free radicals -- a synthetic version of two natural enzymes, superoxide dismutase and catalase, which break down free radicals and turn them into harmless water and oxygen. Worms, living in the environment of these enzymes, lived 30 to 120 percent longer than those who lacked the drugs.

There's MORE. If you are dying to know more,  there's a detailed, fascinating cover story in Newsweek Magazine -- NEVER SAY DIE -- about very famous billionaires who are hooked on living much longer -- what they're doing, and what they've learned.

So what about you and me, right now today? If we want to live longer, we need to eat less, and keep a sharp eye and keen ear open for products that mention that simple drug, or Klotho, GD11, Telomeres, and Rapamycin.

The biggie -- what I have absorbed from what I've read -- the thing that's constantly mentioned re living longer -- what I personally think is the most important thing -- is your attitude.

Tell it, say it, feel it every day, every night, especially whenever you feel just a little bit tired. 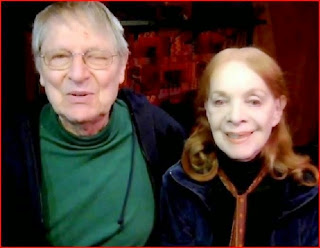 DO WE SOEMTIMES ARGUE?

DO WE SOMETIMES MAYBE ARGUE COPY 3


We recodrded this a couple of  yearsa go.  If Emily asked JOhn this question today, the answer would e the sam


e, the video would probably be .. golly, maybe we'd look a bit older tbut the answer would be the same.