Mark Zuckerberg's been visiting large and small towns. Dressed in a suit, shirt and tie -- not in the usual T-shirt and jeans -- Mark Zuckerberg has been talking about the future.

Buzzfeed.com says Zuckerberg is preaching "compassionate globalism" like he preached at Harvard's Commencement on May 25 -- it was "an unmistakable political platform, putting forth the idea that the U.S. explore a "universal basic income, a stipend distributed to all Americans that will provide a cushion against technological disruption." Though Facebook's CEO has said more than once that he is not running for president, Buzzfeed says: "If Candidate Zuckerberg ever happens, he will most certainly look like the 33-year-old man whom we just saw at Harvard." 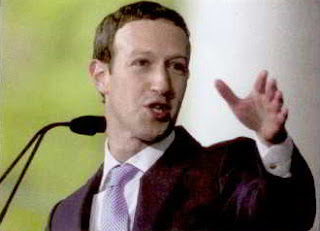 Vanity Fair says, "If Mark Z doesn't want people to think he's running for president, he hasn't been all that convincing. A year ago he pressed the Facebook board to approve a clause that would allow him to retain control of the company if he took a leave of absence  to serve in the government." The magazine mentions that he hired David Plouffe, Obama's 2008 campaign manager, to help run the philanthropy he runs with his wife -- The Chan Zuckerberg Initiative -- and says the most obvious sign of his ambition is-- "during the past three months he's been rubbing shoulders with farmers, factory workers, Nascar drivers -- in Texas he planted a garden, in Wisconsin at a family farm, he fed a calf."

According to the New York Times -- "It's a stunt. Pit stops, like the Addiction Center in Ohio, have been meticulously documented on Zuckerberg's Facebook page. Zuckerberg himself says that his travels are a way to connect with Facebook users. Those who know him say he's serious about escaping the Silicon Valley bubble as his company grapples with questions about its responsibilities and its role in the lives of its users. The trips he's making, colleagues say, have "plunged him into self reflection."

Wired.com says, "If Mark Zuckerberg wants to make the world a better place, he should start closer to home," referring to the fact that fewer than 4 percent of his US employees are Hispanic, and just 2 percent are black," but even if Facebook's hiring practices might not seem world-changing, Mark Zuckerberg is the respected leader of one of the world's most powerful companies, and other firms will follow his lead. Wired.com quotes what Zuckerberg said in his recent speech at Harvard: "Changes start local. Even global changes start small with people like us. The CEO should take care not to skip over the simplest solution."

I am sensing the father, husband is concerned with what his 15-month-old daughter, and the new baby (due in September) will inherit, and thinking what he could do if he were running our government, aware that he would be able to make life on the planet much better for millions of people if he were president.

As as a Facebook user, frustrated often by its rules and regulations -- the fact that there is almost no way to contract a human on Facebook -- feeling serious concerns about my privacy and the ways in which Facebook is making millions of dollars, I do not like Facebook's boss -- I don't like "LIKE," the word that Facebook's creator has turned into a word that everyone uses for expressing important feelings. But this young leader's strong, clear sense of our thinking, his experience, his enormous success makes me feel that he could be a president contender in 2020, or the election after that.

Yes, maybe he should be thinking about running the world.

Here's a pared-down video of the Harvard speech. You can criticize the speech, the 33-year-old Zuckerberg smiling too much, his excessively sincere quality, but he's got powerfully important things to say.