I'm haunted by a crime that happened four years ago. Two 12-year-old girls stabbed another 12-year-old girl 19 times and left her lying on the ground bleeding to death. It has to do with Slenderman, a game the girls played.

Click the name -- you'll see what you have to do in order to be allowed by Slenderman to play it. 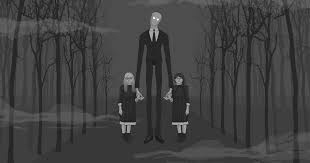 It would take me hours, I think, to learn to play this game, and even then, I'm not sure I could follow the rules, and do the eight thing you must do in order to be accepted and allowed to keep playing the Slenderman game.  Anyhow, here's what I learned about the crime from an article in the news magazine, "Pressreader."

To celebrate her 12th birthday, Morgan Geyser invited two other 12-year-olds for a sleepover party -- Anissa, her current best friend, and Payton Leutner, her best friend since 4th grade.

Morgan’s mother, Angie, told the police, "It was a joyful evening -- they were being normal little girls, running up and down the stairs, holding hands, and giggling.” Angie had no idea that her daughter and Anissa had made a pact months earlier to become “proxies” of Slenderman by murdering Payton. (proxies are surrogates).
The girls carefully planned it --they were going to cover Payton’s mouth with duct tape, stab her in the neck, pull the covers over her, and then, as fast as possible head, for Slenderman’s mansion, which they believed was in Nicolet,Wisconsin, 200 miles away.
That night, however, they decided to wait until the next day. Morgan later told the police, “I wanted to give her at least one more morning.”
In the morning, after a doughnuts and strawberries breakfast, Morgan hid a kitchen knife  in her jacket, and headed with her friends to a local park and its bathroom. Morgan told the police, "There was a drain for blood to go down. We were gonna sit Payton on the toilet, stab her, lock the door and then leave for Nicolet.”
Anissa, during her interrogation, explained that it was easier to kill someone if they're
sleeping or unconscious, so she'd pushed Payton’s head against the concrete wall, but when Morgan handed over the knife, "We just hugged each other."
After Anissa and Morgan smoothed things over with Payton by promising to let Payton pick the next game -- they convinced Payton to play a game of hide-and-seek. “Morgan and I were gonna be like lionesses, chasing down a zebra,” Anissa explained to the police, describing how she led Payton to a hiding place in the woods. "As soon as Morgan found us, Morgan and I pounced."
Anissa told the police that she'd pushed Payton down and sat on her, but when Payton shouted that she couldn’t breathe, she got up. Morgan, worrying that Payton's screams would attract handed Anissa the knife and said, “I can’t do it. You know where all the soft spots are.” Anissa took the knife, but then, gave it back to Morgan, saying, “You do it. Go ballistic. Go crazy.”
Morgan said,  "I’m not doing it until you tell me to,” so Anissa took a few steps back and said, “Now!” Morgan tackled Payton, sat on her legs and said, “Don’t be afraid, I’m only a little kitty cat.” and whispered, “I’m so sorry,” and started stabbing her in the arms, legs and torso, piercing her stomach, pancreas and liver, missing a major artery near her heart by one millimeter. “It didn’t feel like anything. It was like air,” Morgan told police, demonstrating, making a stabbing motion with her right arm.
“I hate you! I trusted you,” Payton screamed, when Morgan finally got off of her. Payton stood up and started stumbling toward the road. Anissa stopped her, grabbed her arm and told her to lie down while she and Morgan looked for help. Instead, Anissa and Morgan headed for Nicolet.
Payton eventually crawled to a sidewalk. Blood soaking into her black fleece jacket, she lay there until a bicyclist discovered her, and called 911. A few hours later, Anissa and Morgan were found walking along a local highway, en route, they said, to Slenderman’s mansion.

Payton, now 15, completely recovered, is a Freshman in Waukesha (Wisconsin) High School. Morgan and Anissa, in custody for the past two years, are in jail with bail set at $500,000. Anissa's trial is set for September 11; Morgan's trial is scheduled for Oct 2. They may be tried as adults, and face 65 yeas in prison. Morgan has been diagnosed as schizophrenic, Anissa claims she has been assaulted in prison.

I'm astounded -- that Slenderman, a spooky, strange, imaginary, very tall, fatherly, godly spirit in a horror game, seized the minds of these children and so profoundly inspired them.

Maybe this vision and the game element fulfills something that some children nowadays, need.

What can we do? Try to stop Slenderman and online games, with rules, laws, policing, legislation, even though what's forbidden and illegal becomes more desirable,  more passionately pursued.

Guys, we can't let a generation grow twisted. We need to dullify their need for heroes to worship. It could be hugely time consuming, boring, but grownups can make a Slenderman hero silly-foolish, stultifying, intolerably dumb-dumb boring.

Lots of things we have to do to survive are boring. We gotta do it!

I put my foot on my desk and took this picture. You can see the sneakers I wear everyday, and note the bad spot where the sole is coming away from where my toes are. 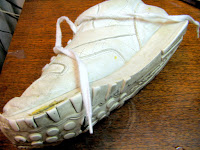 My husband, actor singer John Cullum, periodically re-attaches the soles with glue. Each sneaker, with the newly glued sole clamped in a vise, sits on his desk for 24 hours. When they're fixed they look ... not pretty ... actually, they look awful but I but I wear them again and again, because... golly, can't throw them out.

Anyhow, sneakers are very IN. Famous folks like Kanye West now design their own styles. People are spending $2000 to $25,000 for refurbished, famous brand sneakers that a super athletes have worn. Does buying what a celebrity, like Michael Jordan, wore endow you, or bring you closer to him/her -- to achieving what that person achieved? 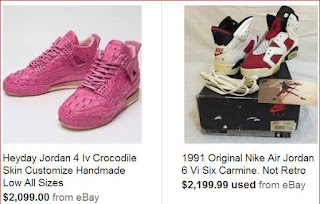 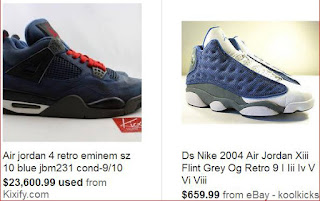 You can even buy Chuck Taylor's  sneakers. Basketball player, coach, shoe salesman/evangelist in the 30's, Chuck's the man behind the All-Stars Converse Sneaker, the most successful selling basketball shoe in history. By the way, if LeBron's one of your heroes, you can buy a pair of his sneakers for a much lower price. 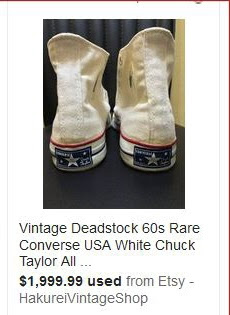 If you're not sure what you want, head for Kixify Market Place, and click all. You'll be amazed.

I gather that Sneaker-itis started in the late 18th Century with people wearing rubber soled shoes called plimsolls -- they were crude, with no right foot or left foot. Around 1892, U.S. Rubber Company came up with more comfortable rubber sneakers with canvas tops called Keds. By 1917, Keds were mass produced.

They were nicknamed "sneakers" because they were so quiet -- a person wearing them could sneak up on someone. Around that time Marquis Converse produced the first shoe made for basketball, the  Converse All-Stars shoe that Chuck Taylor made famous. In 1924, a German guy Adi Dassler created Adidas, the sneaker that track star Jessie Owens wore when he won four gold medals at the 1936 Olympics.

Kids began wearing them as fashion statements, especially after seeing James Dean in sneakers in the popular movie "Rebel Without a Cause."

Then, in1984, Michael Jordan signed a contract to wear a Nike shoe that Nike called Air Jordans -- the most famous sneakers ever made, even more famous after Jordan retired from the NBA. Meanwhile, Nike, Reebok and Adidas are competing, changing the look of sneakers with wild colors, adding this and that, producing shoes for every sport, sneakers that folks hang on to and love.

Like me and my favorites with the Cullum-glued soles. Hey, if you've got a pair from your olden days that you'd love to get fixed, contact Red Star Cobbler in Chicago. The owner Ray Ramirez charges $25.00 for a basic sneaker cleanup. It might take quite a few months till he gets to yours but wow -- he'll make 'em beautiful again and more precious!

Yes, my favorite sneakers are precious. I write-talk more constructively when I'm wearing them. Maybe that's why people wear their favorite sneakers -- they make you feel as if you can walk, run, do sports, do whatever you do -- better.

No doubt about it -- it's sneaker love -- my sneakers are my good luck, rabbits-foot.
Posted by em's talkery at 4:00 AM 2 comments: