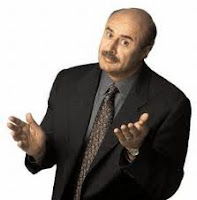 I watch "The Dr. Phil Show" when I do my daily barre exercises earlier than usual.

Usually I tune in "Judge Judy." I like her tough-minded impatience with sloppy-thinking plaintiffs and defendants. But Dr. Phil's fatherly focus, his way of getting to the heart of a guest's problems is always interesting.

Dr. Phil McGraw is a PhD psychologist who's on television every day. The Internet has links that take you to his website, each of his shows, his foundation, to the books he's published, and biographical information about his career and his personal life. I like the way he ends his show, exiting arm-in-arm with his wife Robin, (they've been married for 33 years). "She's the only woman who can tell me what to do, " Dr. Phil says.

He's 62. He earns about $80 million a year. This year is his 10th season on television, doing therapy sessions with people who have life-threatening problems with relationships, addictions, or eating disorders. Lately he's been dealing with teenagers who are destroying themselves, and parents who are hopelessly unable to help their kids.

Dr. Phil was discovered in the late 90s by Oprah Winfrey, who has a marvelous instinct for recognizing sympathetic, strong personalities such as Rachel Ray, Nat Berkus, and Dr. Oz. (Rachel and Nat's topics don't interest me, and I don't like Dr. Oz -- I think the way he demonstrates exercises shows a lack of knowledge.)

Anyhow, Dr. Phil, questioning his guest (the patient), listens carefully and doesn't beat around the bush, or mince words -- he tells the patent in no uncertain terms, where his or her behavior is heading.

Often, Phil offers a seriously addicted patient who's "killing himself," a way to save his life. Bringing in other doctors and rehabilitation specialists, Phil offers to pay for high-level, professional therapy, and guarantees that he'll be monitoring the patient's progress -- proving this by bringing back patients who have been able to turn their lives around.

I was shocked to see 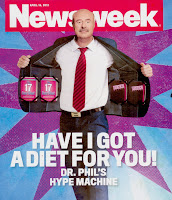 Dr. Phil. on the cover of Newsweek, and read the magazine's cover story that attacked him for selling diet books that he wrote.

Dr. Phil McGraw's "17 Day Diet" that helps you lose 10 to 15 pounds in 17 days, and his weight-loss program for women titled, "P.I.N.K," are published by Phil's 32-year- old son, Jay. These $27 dollar hardcover books can only be purchased on the Internet. Both books have spin-off products -- workout videos, Spanish and audio editions, and cookbooks.

"Newsweek" pointed out that "The Dr. Phil Show" and its daily "sister" program, "The Doctors," produced by Phil's son Jay, are constantly promoting these books -- The "17 Day Diet" was mentioned 27 times in one show. The article strongly suggested that Dr. Phil was not to be trusted -- basically, because he's s psychologist, not a diet doctor.

Whoa -- what's real? Phil often says "Get real," and tells guests they must take responsibility for their actions. But has Dr. Phil, who says he doesn't make a cent from promoting his books, taken responsibility for heavily promoting books that benefit his son? Is Phil doing something illegal? The magazine article quotes legal opinions that say yes, and others that say no.

Actually, I don't trust Newsweek or Time Magazine. I think the managing editors of both these magazines often promote hot "new" news -- not because it's important, but because it sells magazines.

What do I think about Dr. Phil selling diet books when he isn't a dietician?

Based on what I've read about Phil's two diet books, I figure he's selling what he learned about dieting when he, himself, was trying to lose weight. However, I personally wouldn't take advice from Phil or Judge Judy, or ANYONE, on diet and vitamins, or medications, or exercise -- or politics, or life-style, or philosophy, or any of those important things -- not without studying and learning all I could about the subject.

Okay, that's me! But based on the Dr. Phil episodes that I've seen, I think his thoughts on any subject are worth listening to.

Judge for yourself. Here are promos for two recent Dr. Phil shows that I watched. I liked the way Dr. Phil handled the couple, the teenager, and the woman who was fixated on getting bigger breast implants for her surgery enhanced, size 46 bosoms.

The TV talkers are having a ball, expressing their opinions about SHADES OF GREY, the book by British housewife, E L James. They're explaining why the author's detailed sexual fantasies are being devoured by readers.

I have also been reading, blinking my way through various well-written articles by critics who have been to Harvard or Princeton, or attended both.

I guess, if you want people to pay attention to your opinion, a degree from H. or P. is essential.

In my opinion, the sex scenes in E L Jame's best seller are not very interesting or arousing. I blogged about "Shades of Grey" a few weeks ago. Click and skim BEST SELLER DREAMS. There are sex scenes in each of my six novels and, of course, I've had best seller dreams about each of them.

Anyhow, I've heard quite a few TV talkers say that women -- especially those who have become bosses -- want to be overpowered in the bedroom: -- that being spanked, and many of the other sadomasochistic "painful pleasure" things in Shades of Grey" are part of this trend -- that being abused is also part of the fantasy life of the average working woman.

Huh? When did this happen? Last time I tuned into the trend, women were enjoying being boldly passionate and aggressive. Where have I been?

I can't help thinking that someone used the word "trend," and someone else heard the word and used it, and now it is used constantly by the media, advertisers, book sellers and publishers. They make money on sexy books -- they rake in millions when a best seller is turned into a block buster film.

When you see an ad for food on TV -- a plate of food prettily arranged, does it make you hungry? Do you head for the refrigerator? Maybe you do. I don't.

Remember "Fear Factor?" When the contestants were put in glass tanks filled with tarantulas, snakes, or roaches, or asked to eat cow gonads, or worms -- it was shocking and quite fascinating, but it got to be predictably horrifying, as well as sickening. I stopped watching.

Of course I haven't been to Harvard or Princeton, or done very kooky things, experimented with food, drugs, sex or sky diving. So what do I know? 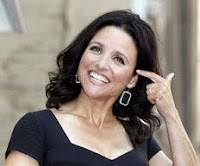 Why is actress Julia Louis-Dreyfus succeeding where others have failed?

Actor Jason Alexander and actor Michael Richards, who played George and Kramer on SEINFELD, have starred in new shows that didn't succeed. Julia Louis-Dreyfus, who was Elaine Benes in SEINFELD, and Christine in THE NEW ADVENTURES OF OLD CHRISTINE (a hit series for six years), is more famous now than she was ten years ago.

Is it luck? Or something about Julia Louis-Dreyfus, the real woman, the actress that is very special?

The loveable FRIENDS have appeared in new shows. Actors Courteney Cox, Matt LeBlanc, Matthew Perry, and Lisa Kudrow have starred in shows that weren't hits though Cox's COUGAR TOWN is on the air. Jennifer Aniston stars in movies though they aren't really smash hits. Her films sell plenty of tickets and get good reviews, but Aniston's looks and her love life get the headlines.

What about big-name movie stars who have played memorable roles in major films?

I think major movies and major stars are a different world. Is it the size of the screen, or the hugeness of their fame? Their names stay with us even if they're retired, or are no longer alive. We love them, but we don't know them or get attached to them the way we get attached to TV stars.

Anyhow, Elaine/Christine/Julia Louis-Dreyfus, is now the the star on HBO's new show VEEP, and as the "Veep," for me she is still the person I know from the other shows -- self-centered, (not repulsively so), practical, amusing, realistic, and quick-minded smart. Whatever her mood, her gestures, bearing and tone are real. She's believable. She reacts to what other people say or do -- reacts always as herself -- as the Julia Louis-Dreyfus that I know.

I don't think of her ever as an actress playing a part. I think, "Hey, I know the real woman." I care about what's happening to her.

Who would you add to this list? (This isn't a favorite actress list.) Who, when you see her on a screen, do YOU like and truly believe?

Here's Julia with Dave Letterman, being herself, looking like herself, not playing a part or promoting herself, or avoiding any subject, just being the gal I like and have watched grow older as I have grown older .