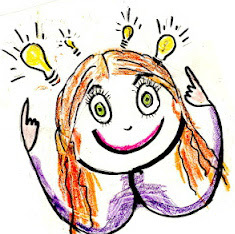 Can you increase your IQ?  Yes! 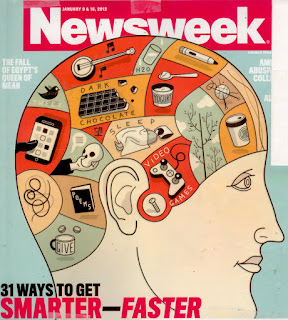 Back in 2012, a nine page Newsweek cover story confirmed this, and gave us information on the research that proves that you can.

Recovering from more than a year of politics, today is good day to Bigify Yourself.

Remember when everyone was taking Ginko Bilova, and Ginseng?  I tried it, but didn't  feel any different. So of course, I read every word on the nine pages and learned about exercises for the brain,  and "tricks" that help you learn faster.

I got information on neurobiology, plasticity, cognitive science, and the proof -- details on studies and tests that showed how "gray matter"(neurons) increase with use, and decrease when they're not used. I learned about stimulants, pills, and "aerobic" exercise for the brain that will improve your short term and long term memory, enhance your ability to retain information, and increase your attention span.

The piece de resistance of the article was  31 WAYS TO GET SMARTER IN 2012 -- an illustrated list with comments, oddly facetious  comments. I Googled, and found an explosion of Websites, bloggers, and radio stations, who were sharing the Newsweek article with their readers. Clicking next, and next until my thumb got tired, I saw 89 versions of the 31 WAYS, that added their own sort of ha-ha (not funny) comments.

Anyhow, 31 ways to better your brain became a hot topic. After I re-read the nine pages, I boiled it down to the 14 things that sort of made sense to me:

In my opinion, Newsweek was saying  if you want to be smarter and there's something, anything that you like to do, love to do, and aren't doing -- DO IT.

In the meantime, I say EAT BLUEBERRIES -- they stimulate brain activity, according to researchers at the University of Cincinnati. (They are especially tasty when you eat them with cottage cheese and a small sprinkle of Sweet'N Lo to add sweetness.) It's even smarter to eat pomegranates. Aside from their sweet and tart taste, their juice contains Punicalagins -- they do more for you than red wine, grape juice, cranberry juice, green tea or Acai juice. As a super-antioxidant, they provide protection against heart disease, cancer and cognitive impairment. Tests show individuals drinking pomegranate juice daily performed better on a memory task than non drinkers.

Guys, you can get Pomegranates from October through February, and you can always get some frozen blueberries -- be smart, not dumb, and yum your way back from our exhausting election into a deliciously bigified brain.

If you're brave with plenty of time on your hands, here's the link to my blog in 2012 that lists and briefly explains the 31 ways.
Posted by em's talkery at 4:00 AM 1 comment: