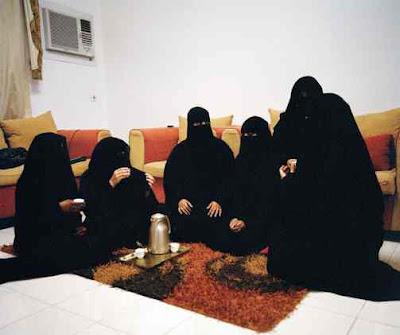 Skimming through a magazine, I saw these five shapes, in black outfits, with these words plastered across the picture: "I pray my daughters have a life like mine."

I've blogged about veils --the kind with slits for the eyes, the flowing, cover-everything abayas that Muslim women wear.

"Never would I wear an outfit like that " I thought, as I dug into an article which Karen Elliott House wrote, summarizing her latest book on modern Saudi Arabia.  It's just been published. A Pulitzer Prize winner, the author has spent 30 years studying this part of the world.

Karen House was a guest in the home of Loulwa, one of the women in the photograph. Loulwa's home is on the upper floor of a modest size house. In her middle forties, the mother of seven children ages 5 to 20, Loulwa is maid, laundress, cook, school-teacher, and wife -- a loving wife, devoted to-pleasing her husband every other day

On the ground floor, the floor below Loulwa's, her husband's other wife -- first wife for the past 40 years -- lives much the same way. The first wife has eight children, and serves them, cares for them, and also is devoted to pleasing her husband every other day.
.
He's a professor, teacher of Hadith, the words and teachings of the Prophet Muhammad. Ever since Muhammad's death, these words have been the daily guide for devout Muslims who believe men are in charge of women -- that righteous women are devoutly obedient -- that serving Allah means serving your husband -- that only by serving God can you enter paradise.

The two wives and their husband are average, middle-class Saudi Arabians, who have been assaulted by technology. They have access to modern shopping malls, the Internet, television, cell phones, drugs, and alcohol.  Educated at King Saud University, though Loulwa speaks English haltingly, she clearly and strongly opposes women who want to drive, get jobs, and dress the way American women do.

Both wives' homes are free of "infidel" influences. There are no photographs on the walls, because any human representation is forbidden by the strict interpretation of Islam. There is one television that is set to receive only a religious channel that bans any appearances by women. Loulwa doesn’t want her children seeing faces of unveiled women who have recently been allowed to work as anchors on some Saudi channels. The family’s sole computer, used only under the wife's supervision, is for homework that is primarily for studying the Quran.

Loulwa's teenage girls admire and obey her. Her oldest, age 19, lets her mother control what music she listen to -- proper Islamic music, cannot have rhythm or include a woman’s voice lest a man hear it and be led astray, This daughter, in her black abaya, also a student at King Saud University, said (about her mother) “She is dedicating herself to helping us have a life just like hers.”

What would I say if I met Loulwa? I've conversed with thousands of women all over the word, and

never met a woman with whom I couldn't communicate. Even when language is a barrier, you can smile, laugh, frown, fan yourself as if it's hot, or point to your mouth as if you're hungry. You can shake your head yes or no.

It shocks me. It frightens me, that this woman has deliberately shut herself off from today's world, and chosen to live in a time and an age of ignorance,

I want to tell her that if I had a daughter, I would want her to be whatever she chooses to be.

I have written seven, yes SEVEN  love thy neighbor posts on Muslims, and have published them in my blog. Muslims live on my street. I like my neighbors. I want to like this woman who lives in Saudi Arabia. But our worlds collide.
.
If I had a daughter -- dear God, whatever God you believe in, it is life and death important for my daughter, your daughter, all our daughters to be free.`
Posted by em's talkery at 4:00 AM 16 comments: 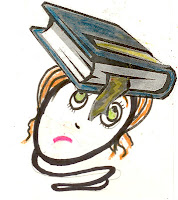 Have you heard the talk?  There's a lot of talk about education -- news alerts  -- the U.S. has dropped to 14th place in the world, and educators are still discussing teachers' strikes, cheating at Harvard, very focused on why kids should (or shouldn't)  bother getting a college education.

Hey, people have been raising kids for about two million years. You'd think by now they'd be sure what to do.  Don't we know, by now, that kids who get good grades do better in life than kids who get bad grades or don't go to school?

Okay, but now there's a trickle of thought that says academic ability may not be what it's cracked up to be.  Also, there is a flood of books on how to fix education in America. The Organization for Economic Co-operation and Development (OECD) and its program for International Student Assessment, that compares the knowledge and skills of 15-year-olds in 70 countries around the world, ranked the U.S. 14th in reading skills, 17th for science, and way below average -- 25th for mathematics.

So everyone's reading books, saying teachers gotta do this, schools, parents, and kids gotta do that.

"FAILURE IS NOT AN OPTION,"  by Alan M. Blankstein, shows how to avoid ten common routes to failure, how to double the resources, (with case histories, and examples) and suggests how a failing school can become a winning school.

"WIN,"  by Pamela Grundy, examines the way school sports (starting in North Carolina,) affected industry, women's suffrage, the rise and fall of Jim Crow, and in high school and college -- how athletics has grown into one of America's most beloved and most controversial institutions.

"TEACH YOUR CHILD WELL," by Madeline Levine, is manual on how to restore family sanity -- with less emphasis on grades, more on values, less homework, more sleep, less fretting by parents, and more encouraging the kids, themselves.

'"HOW CHILDREN  SUCCEED," by Paul Tough, stresses resilience, discipline, re-framing the way kids think and react -- it helps kids more than high SATS do.  Rather than so much focus on congnitive skills, Paul Tough suggests grit, (perseverance), is what kids need to be taught, starting in kindergarten.

Okay, so what did you want to be when you were a little tyke?  I remember it was a giant big question on my mind when I was five.  I didn't want to be like Mom -- she spent too much time folding towels, dusting, and checking on the maid, who also did those things that to me seemed boring, useless.  My father was an executive in the children's dress manufacturing business, but he talked about the book he always wanted to write, and the seven wonders of the world  he wanted to see someday.

I knew it was important to decide when you were young and stick to it.  I'd been to Radio City once, I wanted to be a dancer -- not a Rockette -- I wanted to be the lady in a white tutu and pink satin toe shoes.

What do kids today want to be when they grow up? They've got TV and films  -- fancy cars, sexy stuff, and bang-bang weapons -- fantastically exciting murder-death-sex adventures. They've heard quite a bit about terrorism, nuclear disasters, poison in the air, and other worrisome stuff about running out of water, electricity, roads, schools, bridges, banks, debt, and the top guys -- just about everybody and everything is rotten to the core -- nothing and nobody can be trusted.

Be like Mom or Pop? Be what they admire -- be a money maker -- sing, dance, strip, do something crazy and become a celebrity -- shoot basketballs, hit home-runs -- do something no one else can do in sports, the arts, or some money business -- legally or illegally.

What about college? C'mon, it costs a ton of money -- what have you got if you got a degree? A teachers job?  Get on committees and help run the things?  People applaud the do-gooders. but gee -- that's a hard road to hoe -- look what happened to JFK, RFK, MLK.

Am I sorry I didn't go to college?  No, I'm glad -- I learned to teach, run a business, create sets, sew costumes, hire, fire, direct -- I learned more by tackling more opportunities in my work, than I would have, if I'd gone to college.

What I don't hear in the education talk, nowadays, is the searching for something -- going after something you'd like to do -- making, building, growing, or caring for things.

How about teaching kids to look around -- to learn how to win -- how to lose and not be destroyed by what doesn't happen -- how to boogie and learn more -- it's the spice of life.