John Cullum reads the opening chapter of Emily Frankel's "Karen of Troy," a tale of perseverance and strength -- a shattered, fifty-ish ex wife/mom, coping with divorce, 4 daughters and ailing mother, attends law school -- while finding a new self, amuses and inspires us with her thoughts on fitting into today's world.

Click title:  Karen of Troy
Get a free copy
(free till Feb 19th) UP UP GO AMAZING BUILDINGS 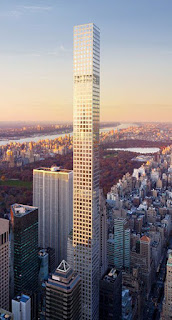 My neck hurts when I walk by it and look up, up, up.

Here's how the city looks from the 95th floor, the million dollar penthouse's master bathroom. 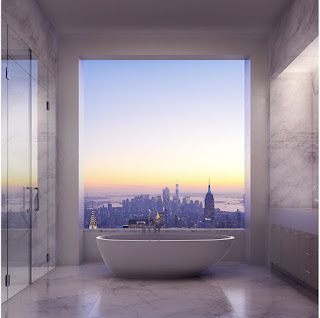 In 1930, the first-ever super-tall, 1,046 foot Chrysler Building, was completed with its 77 floors. For 60 years thereafter, the U.S. was the only country to have buildings that were more than 984 feet tall. The Empire State Building, built during the depression, reigned as the tallest building in the world with its 1,250 feet and 102 floors for 41 years until the World Trade Center (1,368 feet, 110 floors) was completed in 1972. Two years later it was surpassed by Chicago's 1,450 foot-110 floor-Sears Tower that was the world's tallest building for 24 years.

The development of the elevator, the evolving use of steel beams, columns, and glass enabled architects to build taller  structures. In 1998, the Petronas Tower (1,483 feet, 88 floors) opened in Kuala Lumpur, Malaysia. In 2004, the 1,670 foot Taipei was completed in Taiwan. In 2011 the Burj Dubai became the world's tallest building at 2,716 feet, 160 floors, and it contains the world's fastest elevators.

What is it this up up up trend?

Too many floors make it a mall.
Looking down at the street is a feat--


Architecture, nowadays, has gone far beyond tall. Wildly-weird buildings are being built for many, many millions of dollars. Eeny-meeny-mini-moe, which one would you like to go and visit.


What about The Cobra tower? 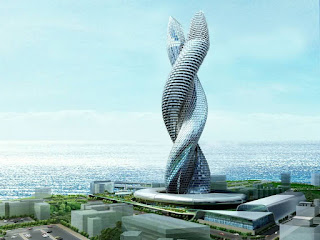 When I showed this photo to my husband, he asked "Were is it?" I was surprised to learn that some people say it's in Kuwait, others mention another city -- apparently it hasn't yet been built. The photo sent me scurrying around the web and finding other marvelous buildings and this video.

Wow -- it's pictures of 35 most amazing (and some of the weirdest) buildings in the world. Browse --  brace yourself for gasps, chuckles, utter amazement and click the link.