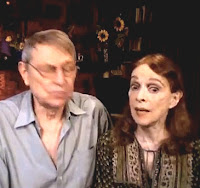 When Emily Frankel declares the subject to be discussed, is shopping for boxers, John Cullum is perturbed. He wonders why they're discussing his underwear, but Em insists it's important to communicate how shopping has changed.

With old larger stores gone in their area, the Chelsea section of New York City, and small new stores replacing them, the Cullums discover there's a new sort of shopper's protocol, as they inquire in various new stores about boxers.

Purchasing them, explaining they are his summertime pajamas, John insists on referring to them as his "bloomers." 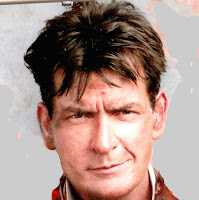 Why am I writing about him? His looks? I like his looks. Also, I'm still interested in all that stuff that was all over the news, on every channel, about his weird behavior.

Last March, when he was raving and ranting a few times a day on TV, I figured he was finished as an actor. He was ridiculous, seriously nutty. Well, today, he is probably a bigger name and more of a star than ever.

Very likely, you know more about Sheen than I do. When I saw "Platoon" back in the late eighties, I thought he was a good actor, not as good as his dad, Martin Sheen, but definitely interesting.

In reading about the various films the 46-year-old Charlie's done, the awards, the nominations, all the things that got Charlie Sheen's name on the walk of fame in Hollywood, what caught my attention was the first movie he created -- "Discovery Mars," a video documentary, and also the action movie that sheen wrote, produced and starred -- "No Code of Conduct."

That other Charlie -- the brain, the creative artist aspect of him -- it's in his face -- the wrinkle in his brow between his eyes -- the bored, cynical, impatience he projects.

Sheen hit the small screen in 2000,. replacing Michael J. Fox for the last two seasons of the sitcom "Spin City." Three years later, Sheen was cast as Charlie Harper in the CBS sitcom "Two and a Half Men" -- a show that was loosely based on Sheen's bad boy image, and over the years, the show has become a reality show about the real Charlie's alcohol and drug use, his martial abuse, and divorces.

He has a memorable style in the way he delivers his lines. The pause, the takes, (as if he's thinking), then rat-tat-tat -- out comes a dry, crisp line, that gets a laugh. Funny or not, the pause, his dry delivery, quite often makes you think it's funny even when it's not.

Last year, during his eighth and final season on the show, Sheen was paid a record $1.8 million per episode.

It wasn't a show I watched for more than a minutes or two over the years, but I certainly heard about it, and after seeing last year's freaked-out Charlie, I was relieved when Warner Brothers announced that they fired him from "Two and a Half Men," after "careful consideration."

I can't help wondering if Sheen wanted to be fired -- wanted more money? Or a new show? This man is a very intelligent, shrewd, experienced star.

He's got it -- "Anger Management." I saw the premiere. I never got really absorbed in watching the show -- I was restless, couldn't believe the plot, or get involved in any of the scenes,. Charlie was playing a therapist helping a group of neurotic patients. ( In my head, I kept hearing the guy who wrote this show selling his idea, thrilling everyone involved when he said "Let's write a show about Charlie handling his own anger.")

The reviews from major and minor critics for the first episodes have not been good.

Will the show nevertheless succeed? It seems like a re-hash of what has been rehashed too many times.

I'm writing this to tell Charlie-- "I'm a fan. Sit tight, you'll get lots of offers. Wait for a script about the side of you very few people know. Maybe your dad, your wives know you, but I would love to get know the grownup guy, the actor artist, who can write, direct, and produce. "

I think a film, even another TV series based on THAT Sheen, would be absorbing, even quite fascinating.
Posted by em's talkery at 4:00 AM 12 comments:

Robin Givhans, a fashion columnist I trust, recently wrote about Japanese designer, Rei Kawakubo. That's the only photo of Kawakubo I could find.

Not sure about the pronunciation, I Googled and learned that Kawakubo is, indeed, a major name in fashion -- a name I never heard of. A lot of people, I bet, have never heard of her, but Robin Givehans praised her to the skies.

(Hey, isn't success measured by people knowing who you are? That's why I'm face-booking and tweeting, and rather frequently mentioning my six romance novels, http://emilyfrankel.com.)
Since Robin Givhans says that Rei Kawakubo is one of today's most original talents, that she's received many awards, including an honorary doctorate from the Royal College of Art in London -- I am definitely paying attention to Kawakubo's art.

Kawakubo is the founder of Comme des Garçons, an avant-garde fashion line that has been making clothes for over 40 years. The label, Comme des Garçons, means ''like some boys." (To me, that suggests masculinity, a femininistic point of view, perhaps.)

Kawakubo and her husband, Adrian Joffe, operate the eclectic Dover Street Market in London, giving the Comme des Garçons company, (CDG), another way to burnish its avant-garde image and grow. In 2008 CDG had a turnover of $180 million.

All this was a preamble to my looking at Kawakubos outfits.

In 2009, the former White House social secretary, Desiree Rogers, arrived for the Obamas’ first state dinner wearing a gown (seen here), in which strands of pearls lay trapped between sheer netting and a pale peach tube. The dress was looked at by a D.C. columnist as a "rebellious snub of discretion, hierarchy and protocol." (Rogers left the White House shortly afterwards.)

During her Spring 2010 runway show, one of Kawakubo’s few comments on the collection was, “I’m an adult delinquent, to the end.”

These outfit were wildly applauded.

Her fall 2011 show featured gilded leather jackets, a coat with no front or back, and other unusual dresses, which she called “Hybrid Fashion.”

Are we, or aren't we seeing the model's naked right breast? I'm not sure. It could be a painted scarf?

A critic, raving about the show, said. "Kawakubo typically speaks in riddles wrapped in metaphors, and her clothes are like premonitions in boiled wool and nylon."

Kawakubo herself said, “Comme des Garcons can never, by its nature, appeal to everyone. It would be the end of CDG if it ever did.”

If you could have any of these outfits to wear, which one would YOU pick.

I'm kind of enthralled by the pink outfit. T

he front and back are the same.

If you arrived . at a party wearing it, no one could be sure if you were arriving or departing.

That's the way I feel about the art of Rei Kawakubo -- I am applauding and booing at the same time.
Posted by em's talkery at 4:00 AM 10 comments: 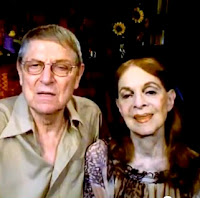