QUIETEST PLACE IN THE WORLD

We lived there when my husband, actor John Cullum, was playing Holling the bartender, in the television series, "Northern Exposure."

It was a relatively quiet life, but noisy neighbors were a problem. We were living in a row of identical apartments. Then we moved to the guest house on the Spaulding estate. (E.E. Spaulding was one of the richest men in the state of Washington). It was quiet, isolated, in a corner of a huge grass lawn. The only noise  -- it was a twice-a week -- came from three gardeners, who arrived to care for the huge lawns and garden. The noise from their machines was LOUD and quite awful.

I wish we'd know the guys who ran Bill Gates' Microsoft back then. Here's the quietest place in the world. 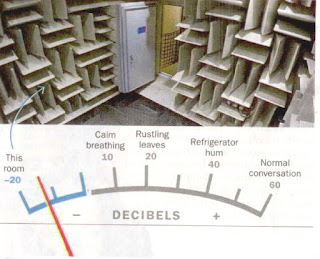 This area is part of the inner sanctum, according to a Time Magazine reporter. It's an anechoic chamber (no echo's or reverberations, pronounced 'ane ko ic'), in Microsofts' Redmond, Washington audio lab. It set a record in Guinness World Records, as the quietest place on earth.

Since we live in the heart of Manhattan, on an extremely busy cross street, next time John Cullum works in a West Coast television show, we'll head for Redmond and find a place to live near that anechoic audio lab.
Posted by em's talkery at 4:00 AM 4 comments: 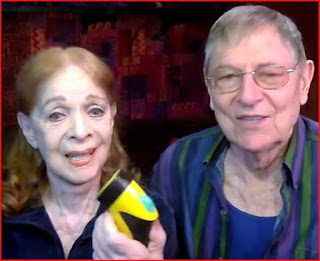 Emily holds up a flashlight.

Shining it on John like a spotlight, she reminds him how he created it for her, turned a store-bought flashlight into an amazing night light.