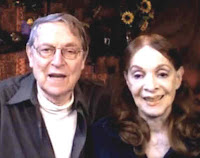 In Gatlinburg, TN,  John Cullum was starring in "Chucky Jack," an outdoor drama about the Indian fighter John Sevier, one of the foundering fathers of Tennessee.

When she saw John, Em remembers thinking -- "that's the best looking man I ever saw."  John was struck by the pert look of her driving the company's extra large station wagon.

He recalls the night he walked by her home in NYC, singing Chucky Jack's theme, the fact that Em heard him, raced downstairs, and invited him in.

"And I never left," John says, and they reminisce. 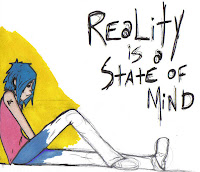 My day is filled with UN-realities.  I don't have a paying job.  I employ myself.   I am very busy doing my work. I don't earn money from it.

What am I getting? Fame? No. Busyness is what I am getting. A reason for getting up in the morning.

I write a blog. I am, after three years of "blogging," hooked on blogging.  Actually, I don't even like the word, but I push that out of my mind.

I write  a reaction, my reaction to various subjects. It's sort of a log of what's been happening in my personal world --  the world of my home -- and the things that are  happening in the real world -- events  that seem important, NOT politics or wars, but sociological stuff --  the relation of the event to older things that have been a part of my real life that affect my husband and family.

So  my "blog" is a blabbing log,  What I write is sort of like a conversation with imaginary readers, not real people.

The  people who read my blog  come and go. They discover me, "wow," like me, read my blog for a week, or two, even a couple of months. They are "onliners."  Onliners are not real people. They're mostly folks like me who don't have a paying job, who keep busy, and feel they are accomplishing something when they're on line.

Actually, what does "online" mean?

You're sort of holding a tube, an imaginary skinny tube -- you can't really picture yourself wriggling through it, or being blown through it to another location.  Despite the fact that you can't see yourself traveling, you are -- thanks to the skinny tube.  It's amazing. You are there in another person's mind, in another part of the world. It's a place and a person you don't know, but you are THERE with him/her/it.

So, that's what I do. I travel in the tube and connect with others who are unreal, like me.  At times this is somewhat disturbing.

I have a real husband; a real son whom I don't see very often, but when he visits, he's tangible, touchable, embraceable. There are other real people with whom I interact -- two employees, and friends with whom we dine -- not very  often -- they're busy like I'm busy, with UN-realities.

So, the purpose of this 'blow" of ideas through the unreal, wireless tube is networking with ... well, various intangible, untouchable, un-real things.

Beware  -- a lot of what we get  in tweets, in face book's news feed, in photos, in profile pictures, are places, and things, tons of  photos of animals.  I declare loudly my warning, none of this is real.  Pets, people, places in pictures are not real.

What to do about this?

At least once a day, probably twice a day, maybe -- 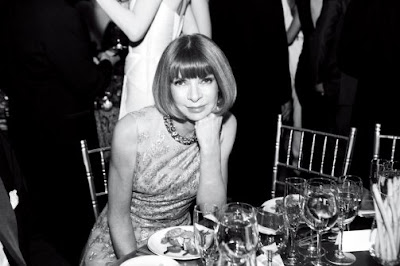 For almost 25 years, Anna Wintour has been the editor of Vogue Magazine.

Oh boy, has this pretty woman -- hand on her chin in this picture -- ever affected what you and I are wearing right now!

Robin Givhans, Pulitzer prize-winning fashion critic whose writing I like, and mostly trust, went on and on in a recent Newsweek article, about Anna Wintour – her new pals, old pals, her fund-raising for Obama, parties she's attended at celebrity homes, state dinners at the White House, fashion runway shows she's attended. The article is loaded with names of bankers, banker wiv

es, ambassadors and other VIP'S with whom Anna has been socializing.

Gee, my brain's jammed with major things -- political wars, potential world wars, life and death things – and I found myself wondering why I was wading through this stuff -- is Wintour on the verge of leaving Vogue?

Vogue Magazine is bigger, richer, more important than ever -- is Wintour trying to make it bigger and, richer? For years, she's been recommending fashion designers. Whomever she recommends usually gets the job. (Not little jobs, these are the super, top-echelon, power positions in fashion.) Wintour helped J.Crew and The Gap get into Council of Fashion Designers of America; she raised $85 million for the Metropolitan Museum of Art’s Costume Institute. According to Givhans' article, Wintour is deeply involved with high-profile, powerful people from the worlds of fashion, film, music, sports, and, of course, politics.

frocks that, of course, define fashion. Photos show that she personally prefers dresses, (not slacks), chooses heels rather than comfort, wears fur despite the fact that it's

Givhans says Wintour is super influential, but for me, "super influential" is Hillary Clinton, Michelle Obama; also commentator Rachel Maddow, Katie Couric, and culture-shaper Lady Gaga. Also, I pay attention to comments by Shirley MacLaine and Sandra Bullock, and I don't ignore, though I'd like to ignore, the fame-hungry Jennifer Lopez, who's into everything.

Hey, if you've got an up-and-coming someone you're observing, a person who's truly, seriously, on the verge of changing our world, let me know so I can read, and write about him or her.

Since Givhans has paid attention to Wintour, I'll pay attention, but aside from frocks, heels and fur, what she's doing, where she's heading ... well, it's just not clear.  All I see is a powerful woman who wants more power, and that gives me the heebie-jeebies.
Posted by em's talkery at 4:00 AM 5 comments: 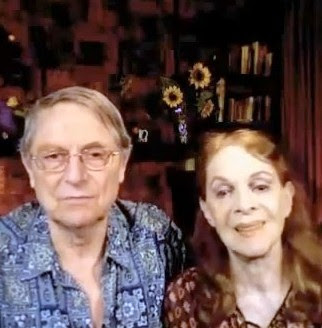 John Cullum, enjoying the subject of villains, right off the bat mentions the challenge for an actor in playing an evil, crippled King in Shakespeare’s RICHARD THE THIRD.

Emily, remembering when John was writing a play about Benedict Arnold, wonders what fascinated him about the traitor, and why, later on, he worked on a play about John Wilkes Booth, the actor who assassinated President Abraham Lincoln.

John explains why these two men still interest him, and compares them with the assassins and traitors in the news today.

As their conversation ebbs and flows, he surprises Emily by revealing the name of his most favorite villain, a part that he’d like to play right now.