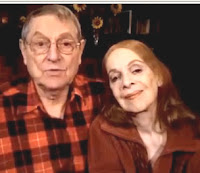 John Cullum mentions that trolley cars have disappeared. He remembers putting coins on the car rails in Knoxville, Tennessee -- flattening coins into discs was one of the games he played when he was a boy.

Because of the Internet, many places seem to be gone forever but the Internet has opened a whole other world that they, like everyone else find themselves exploring.

The Cullums mention various things we used to count on -- books, newspapers, services, clothing, restaurants, and bookstores -- that have disappeared, and share how it's affecting their careers.

Because of the Internet, many places seem to be gone forever, but the Internet has opened a whole other world that they, like everyone else, find themselves exploring.

KING OF THE WORLD. 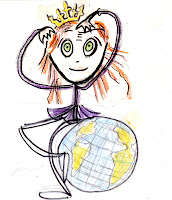 What, who is the King of the world?

It's childish to wonder who is King of the World, but I'm wondering.

What is a "king?" The KING is the most powerful entity who leads and rules whatever domain you're talking about.

What's "powerful?" One guy? a group of people? a country? a philosophy? Or is it weapons, formulas, knowledge? Is it know how?

What's the largest, most powerful computer in the world? Who has it? 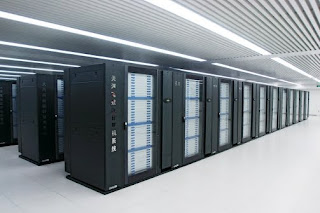 The USA was number one. Six months ago, when China pressed the button on "Tianhe-1A," in Tianjin, China. This computer is five times more powerful than the big mother computer at Livermore.

WHOA! A few weeks after China announced Tianhe-1A, Japan announced an even bigger supercomputer that bumped Tianhe-1A into second place.

Experts (scientists and economists who are watching, keeping tabs on who's the most powerful country in the world today) say China will soon leapfrog Japan again. Already, China has 74 of the 500 biggest supercomputers in the world, up from zero a decade ago and second only to the U.S., which has 263.

That doesn't sound good, but Livermore Lab is now, mile-a-minute, designing an enormous new supercomputer. Code-named "Sequoia," it can yoke together more than a million microprocessors and produce eight times the power of the Tianhe-1A.

The fact is, the first pieces of Sequoia have started to arrive.

It's 96 racks, each containing 32 slim little computers, stacked on top of each other like pizza boxes. Picture 1.6 million pizza-box-size processors hooked together. It's a yummy amazing, hopeful picture, but writing software that can run across them all is complicated, a very big deal -- nobody has ever written software for a platform like that.

So where does it stand?

IF the Livermore guys can raise the money, Sequoia could be operating by the end of 2012. Meanwhile, China has the money and they're working hard and fast on a new Tianhe-1A that'll leapfrog over Japan.

Right now, in the U. S, we're pressing for health care, for paying off the debt, for money to repair and run the essential things in our government and fix the worn-out things that we need to fix so we can live.

I feel like a child, the kid mom took shopping, I wanted this, or 10 of that. Mom said no, and I learned to live without it.

Okay, we need to have the biggest, best, super-computer, but we can keep going, and continue to be America the Beautiful even if we can't be number one in pizza boxes, power, and money right now.

I think we'll be okay. We can live without being KING OF THE WORLD.
Posted by em's talkery at 4:00 AM 7 comments:

TRIP WITH EM INTO WHAT IS ART?

Settle down with a Coke or Champagne, and popcorn or munch on. That's Damien Hirst, the artist, lying on the floor beneath one of his "SPOTS" art works.

The success of Damien Hirst astounds me. It worries me. I suspect that my reaction to his success may end up embarrassing me -- I can't help wondering if this guy's art is phony baloney. Yes, I can dig up well known authorities in the art world who agree with me, but many, many more experts bow down to this 47-year-old-artist and deem him significant, important, an innovative MAJOR ARTIST.

Instead of quoting critics, or telling you the story of how and why the young beginner artist has become one of the most successful and highly praised artists in the world, read -- look -- see for yourself.

One of Hirst's first successful works was -- not a painting --

it was a foal with a gold horn in his forehead, preserved in a tank of formaldehyde -- a Unicorn called "THE DREAM."

Pre-"Unicorn," he created a few other art works that were tanks with other animals. I have difficultly perceiving pickled animals in tanks as art, but the concept is certainly innovative.

Then, Damien Hirst knocked out the art world with 'FOR THE LOVE OF GOD," a human skull, anointed with small and large diamonds. It's been sold for $100 million dollars. Having invested his own money in the diamonds, Hirst co-owns the skull, with the group that bought it. In the film clip below, you'll hear what Damien Hirst says about his art dealing with death.

You're seeing some of the art created by an artist who's incredibly successful financially, and very HOT right now. Here's what Time magazine's Belinda Luscombe and Hirst discussed that certainly establishes his fame. For me, their British accents get in the way of clarity, but clearly Belinda and Damien are sophisticated savants -- they jabber easily, almost banteringly, about money, life and death and art.

I have written about Damien Hirst before --- my post August of 2011, "Hot New Art " mentions his shark in a tank. Back then, I was shocked -- I am still shocked by Damien Hirst's success with "THE PHYSICAL IMPOSSIBILITY OF DEATH IN THE MIND OF SOMEONE LIVING."

Click and see this $8 million dollar GREAT WORK OF ART being assembled.

You can see if you visit NYC -- the Metropolitan Museum of Art in Manhattan is thrilled by the its acquisition of it.


Okay -- here's Damien Hirst's latest huge success. Hirst has 331 of his dot canvases, (out of about 1,400 he made), being exhibited, simultaneously, by eleven Larry Gagosian galleries in eight cities around the world. . Is this a retrospective, a philosophical depiction of his vision, his feeling, his statement about the world, about "Everything being a part of a whole that stretches forever, in every direction and dimension?" (I'm quoting Millicent Wilner, Gagosian Gallery Director, who's worked closely with Hirst, who says that is what is)

It is certainly impressive -- all these paintings of dots, spots, blue for blue, and red for love, and green for jealousy, and white, pink, all the different shades of spots, spots, spots, before our eyes.

Easy to look at, but why should we bother?
Posted by em's talkery at 4:00 AM 7 comments: 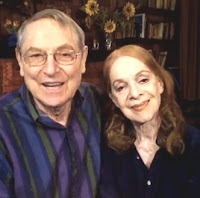