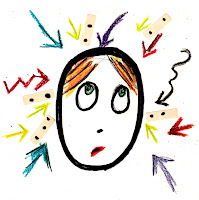 Why do I save paper napkins? Every morning I save the one I wrap around my toasted bagel so I can bring the bagel downstairs to my desk with my coffee. But later in the day, I don't throw the napkin out. I fold it and bring it back upstairs for tomorrow's bagel.

I save comfortable stretched-out panties -- some with un-elastic elastic and rips in the fabric -- my God -- some are maybe 15 years old! And I save bobby pins. I don't know why. After I use them, I put them back in a bobby pin box.

Why do I wear the black warm-ups that I bought 20 years ago in LA ? They're worn thin in spots; they don't keep my legs warm; I have to wear an elastic waist band to keep them up, but THEM I wear -- NOT the brand-new, well-fitting, tailored looking but similar warm up pants I bought last winter? I bought three pairs. I never wear them.

o I prefer my old things? Am I a penny-pincher?

Is it the syndrome of the housewife with the fancy parlor which she never uses, only uses if she's entertaining very special high-falutin' guests?

Uh oh... I think I'm beginning to understand this use old things syndrome.

I see it when my husband wraps the last bite of his steak in Saran Wrap. I see it in his closet that's crammed with shoes, jackets, pants, and shirts he no longer wears -- some of these things are former "best outfits." Also underwear. He's got about 10 unopened packages of shorts piled in one of his dresser drawers.

Furthermore, he compares prices when he shops, checking "ounces" in a package or a can, dividing it by the price.

I scoff at him, but perceive that it's the same as my saving paper, bobby pins, and panties. I think I should take all my old panties and his old jockey shorts -- throw them out! Today, immediately -- stop typing this post -- go upstairs and do it!

But ... no. I can't do it. A part of me thinks that all this has to do with time passing, the sense of aging, of you, yourself wearing out. You're comparison shopping yourself with younger folks because the old things in your closet are aspects of YOU that are no longer useful. And throwing them out ... well, throwing them out is ... well, it isn't death, but it IS preparing for the end of your life and throwing bits of you out.

Let's laugh. It's so typical, so common.

When I saw her on the cover of Newsweek -- puffy kissable lips, sculpted cheekbones, eyes looking out from the page as if she could see me, I wondered why is she on the cover?

The answer was there beneath her perfect hands. "A NEW MOVIE A NEW MISSION, ANGIE GOES TO WAR." Angelina Jolie is emerging as a writer, director, producer, sort of like Clint Eastwood.

Her publicists are doing a great job -- she's thirty-six now, with six children, three of her own and three whom she adopted. (I know, from my own and my husband's show business background, that a star's words, photos, statements are worked on by press agents planning and collaborating carefully with their famous client.)

Ten years ago Jolie was wild, outrageous, unconventional -- I can't forget her wearing, around her neck, a vial of blood from one of her husbands, her bragging about making love in public places; her ugly remarks about her famous actor dad, Jon Voight, and I didn't invent the fact that she's touted her own bisexuality, and her tattoos.

Well, now the tattoos are mostly covered with makeup or lasered away. She's reconciled with her dad. She's been seen all over the world with refugees and displaced persons. Her quest to become a humanitarian has been helped by her partner, Brad Pitt. After all, he's one of the most famous international male stars in the world.

No doubt about it, hints have been appearing in major magazines and television shows about their marriage. Obviously their publicists have been told by them to transform the fascinatingly unconventional, couple in to an adoring Mr. and Mrs.

Hey, they are skilled actors, They've been a loving couple, playing a loving couple for six years. Acting is "acting" -- creating a feeling, a truth. In every movie I've seen Jolie in, she's what I watch -- my eyes go to her. Right now she' s "acting," performing a new role.

The NY Times writer who interviewed Jolie recently, before the opening of her film, Land of Milk and Honey, said, "Ms. Jolie is also aware that, given her image as a Hollywood star, her pursuit of more weighty matters may expose her to ridicule. For every critically acclaimed movie by George Clooney or Sean Penn, there’s a mercilessly mocked Madonna or Kevin Spacey vanity project."

Yep -- we put our stars on pedestals -- we knock them down. I don't know why I don't like Angelina Jolie or trust her. But gee, if a movie director's career is what she's promoting, I can't help wondering why in Newsweek there were three pages -- yes THREE full-size pages-- of wonderfully retouched photos of the Wow perfect Angie? 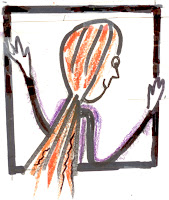 I'm looking out my window. It's the first Monday, the beginning of the first work week of 2012.

It looks the same -- gray street, gray, white, and red brick buildings, lamps posts, parked cars, meters like sentries that demand how much -- $18.00 for a half hour of parking on our street (last year it was $14.) It's a busy business street in the heart of Manhattan.

Yesterday, in the buildings across the street, like last year and the year before, I could see marvelously decorated Christmas trees on quite a few different floors -- all large -- bigger than the trees I saw last year, and all appeared to have been expensively, creatively, labored over.

Soon, maybe even today, they'll be in the street.

And steel Dumpsters will be in street, piled high with cartons, gift boxes -- piles of red, green, gold, silver things -- ribbons, bows, labels, cards, protective tissue, wrapping paper -- so many pretty things everyone picked out carefully, purchased, debated over how to handle, then wrapped, tied, taped and fussed with.

Like the Christmas trees. After the holiday you can keep the tree up for a week or two -- you can pretend not to notice the branches -- green becoming brown and brittle -- browned, dead, pine needles beginning to cover the floor around the base of the tree, migrating, magically moving into other parts of the house that have to be kept clean.

So, we'll move our tree into the hall -- trees are elevatored or carried to the street, and laid to rest ignobly on their sides at the curb. 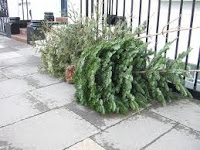 Sometimes the tree lies there and brown turns to gray until the garbage trucks and the garbage men arrive and the remnants of what once was your marvelous -- oh, this is IT tree! -- are disposed of.

Ours was a lovely tree -- a little crooked, but it grew and grew somewhere to be ready for us to chose it, buy it, make it into ours.

Yep, things have changed since last year, but if you know who people are, even my street turns into a chummy neighborhood.
Posted by em's talkery at 4:00 AM 5 comments: 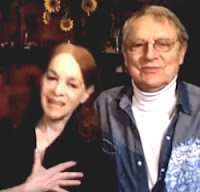 The Cullums call the song 'HI FROM US."