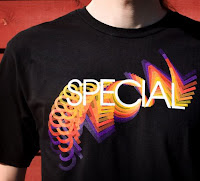 A concerned, practical, beloved, good teacher, David McCullough, gave a speech to graduates at Wellesley High School, telling them, telling the graduates "You are not special."

He told the graduating class that parents and teachers encouraging them to think they are special are confusing them. The main point of his speech to the students was forget about being special. He pointed out that everyone striving to be special, reduces what is special -- that ultimately, no one ends up "special." He proved it with logic, with numbers, with strong, specific examples, as well as quotes from major historical figures.

This McCullough guy is the son of a Pulitzer prize-winning historian. He's been a teacher for 26 years. He's down-to-earth, nice-looking, friendly. H

e relates powerfully to the audience of kids, parent, and teachers.. His speech went viral on the Internet -- graduates and their parents loved what he said.

My more than 26 years of reaching, striving, expanding me and my dreams and my horizons, prompts me to say being special is life and death important to loving yourself.

Do I need to quote great names to remind you about "Love Thyself?"

"You, yourself, as much as anybody in the entire universe, deserve your love and affection."
Buddha

"Your sacred space is where you can find yourself again and again."
-Joseph Campbell

"Above the cloud with its shadow is the star with its light. Above all things reverence thyself."
-Pythagoras

"Self-love is the instrument of our preservation."
Voltaire

Hey, I'm shouting at you as if you were my child, my family -- the only one I trust is me. When I don't, I am confused, depressed, sort of wandering and lost. I am not lost -- I'm powerful when I hear and obey my inner voice, even when it's just whispering.

First and foremost, hear your inner voice! Listen to you! Be special -- you are special!

Want to see McCullough's words, read them, and see what you think? Here's a link to David McCullough's full speech.
Posted by em's talkery at 4:00 AM 7 comments:

Say her name and I picture her in her white bikini undies -- what a powerful ad that was, promoting the not great, but fascinating movie "Alien."

Sigourney Weaver was most interesting to me in 'Working Girl," as the knowing, sophisticated boss who underestimates the talents, intuition and sex appeal of her assistant, wonderfully played by Melanie Griffith.
.
I was rooting for Melanie but I loved the boss, Signourney.

And I loved Sigourney opposite Mel Gibson in "The Year of Living Dangerously." I have seen that movie at least twice. And, of course, I remember her playing in "Gorillas in the Mist," in "Ghostbusters," and quite a few other films.

Even so, my sense of Weaver is as a down-to-earth, un-snobbish, friendly, accessible, typical "gal" -- that's the Sigourney I think I know.

I don't know her personally, but John met her when her husband to-be, Jim Simpson, was doing his first directing project. What amazed me, when John described the couple, was that Sigourney, despite her rising status as a star, was at every rehearsal just as a wife, encouraging him.

I didn't pay a great deal of attention to other "Aliens" films, or the fact that she's TV royalty -- daughter of television executive and television pioneer Sylvester "Pat" Weaver, who ran NBC. Apparently, daughter Signourney pursued her career on her own -- did all the apprenticing, studying, auditioning -- was hired because of her talent, and the look of her. She's not super beautiful, but rather average, fresh-faced, good-looking, and tall -- really very tall.

And I don't pay a great attention to her many Oscar nominations or the awards she's won. I just like her in whatever she plays -- small or large roles, villain or heroine. I like the women she plays, and it doesn't seem like "playing" -- it seem as if it's her.

She's starring in a new USA mini series, "Political Animals," about a Secretary of State married to a popular, womanizing ex-president. Though the ads and reviewers say it's the Hillary Clinton story, the womanly Sigourney makes the character her own, and doesn't distract or confuse my feelings about the amazing Hillary.

That's what's special about Weaver -- she is always herself, centered, never borrowing from other women, or selling us typical attitudes toward love, romance, or morality. Watching Sigourney, you meet the real woman.

Will this mini series be a hit? I hope it will be -- success breeds more success -- moves, TV, Broadway shows. Sigourney Weaver is growing, expanding, becoming more and more interesting.

Remember this scene from "Alien?"

UBERS ARE TAKING OVER

Young, rich, glamorous, pretty people -- that's what the crowds are, at happy hour in the nation's cap

itol, and the seven counties that surround it.

It's a new generation of men, women, singles, married or going-together, who are enjoying the fashionable restaurants and bars, theaters, speakeasies, hot spots, spas, salons, gyms, new businesses that are opening practically every day.

UBER can get you there, anywhere, wherever you are in the mood to go. Even as the nation struggles, it's good times, the good life for the young hipster crowd in Washington DC nowadays.

The guy who wrote about this for Time Magazine, quoted a joke about Miami: "'It's nice, because it's so close to the United States," and added, "Well, Washington is very nice these days."

UBER, a web-based, cashless California limo service has just launched UBER in San Francisco, New York City, and Philadelphia. Customers just call in with a smart-phone app and pay with a credit card on file, the way most hipsters pay for most everything else today.

Who are the hipsters?

They are more or less "contractors." Thanks to massive outsourcing by the Clinton and Bush administrations, there are probably two government contractors for every worker directly employed by the government.

D.C. is one of the few places where a liberal-arts major with no particular skill, can get a job. Colleges and universities have learned to run sophisticated internship programs designed to place their graduates, and soon-to-be graduates. "Interns" are often underpaid, usually overworked and frequently subsidized by their parents. 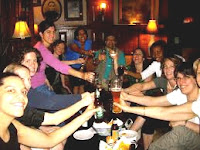 Happy hour is how you meet people, get jobs, find roommates, get job tips. Actually drugstores in the area have been devoting more and more shelf space to condoms, pregnancy tests, diapers, and Pedialyte, (its supposedly a hangover cure.)

According to Time, Washingtonians are skinnier, exercise more, eat more vegetables, and are more likely to have health insurance than the average American. They're also more optimistic -- about the economy and about the future in general.

Whoopee! Want to be an intern? Just pack your essentials and non essentials. You can transport everything and make the move in comfort. Just phone UBER.

Does what I'm saying sound like an ad for boozing, and amusing yourself with doing nothing?

I don't think life in Uberland is grand -- I think it's quicksand.
Posted by em's talkery at 4:00 AM 7 comments: