I keep seeing THIS.

I continually hear THIS. 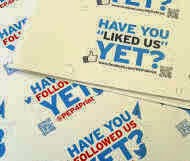 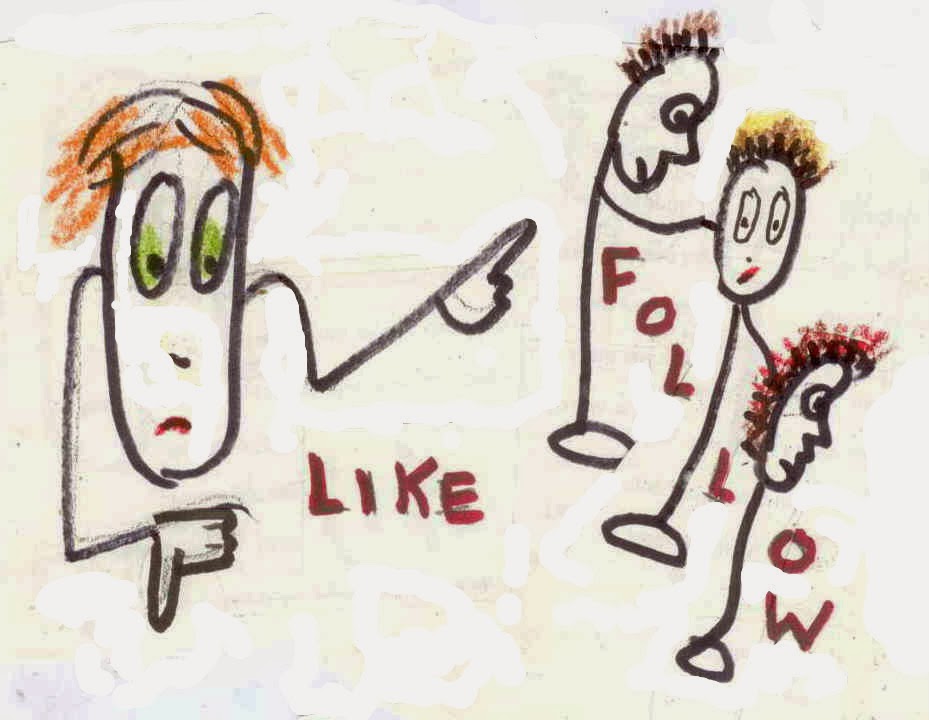 It gets me wondering why am I tweeting? Why am Facebooking? It gets me asking myself, what have I gained from the weeks, months, years I've been doing this?

Night and day, over and over, every program, every news alert tells me LIKE US, FOLLOW US. When did this start happening -- last year, the year before?

Who's paying for it? The producers of the show? Twitter? Facebook? They're using our Likes, our Follows, to prove with numbers that some show is popular.

You think that you are selling a book you self-published, that social networking is helping you sell it?

Hey guys, it's not helping to sell anything, be it -- a book, your handmade jewelry, your designs, your services -- your friends and followers aren't customers. They respond because it makes them feel like they're doing something, and they're just selling themselves like you are.

Here's a big-fat-nasty question -- if you weren't tweeting, or facebooking, how would you use the time you now spending on social networking?

Write another book? Make some furniture? Teach someplace? Do a project for your community? Whatever you do, other than social networking, involves the real world, real people.

The social networking bandwagon we've jumped on, is smallifying us, making you and me one of billions, of nobodies.

I Googled. Got some advice from a book, "Power of Myth,"  by a wise philosopher, Joseph Campbell."

Twitter and Facebook are myths created by guys who are making tons of money by promoting the myth and making it something we do like mowing the lawn -- like going to a party with strangers every day, who like you, aren't sure what they're doing there.

What makes you feel alive? . Making friends with aging strangers, following them?

Truth:
Social networking is aging you faster than time, it's making you OLD.

"Once wasers." -- it's my term for famous, important people who have become "has beens."

Show biz has beens are fun to keep track of.

Like Nick Nolte, when he dropped out of sight. Like Britney Spears -- she certainly has had some wild ups and downs.

Dick Cheney gets the Em prize for VIP  "once-wasers." And George W Bush gets 2nd prize.

John McCain's a runner up. He talks as if he is an authority on war and peace, along with Sarah Palin who is still great looking, and seductively nasty. Golly, I can hardly wait for the day when John Boehner, who's affecting every single day of what isn't happening in America, becomes a once waser.

Names-names don't go away. Once we learn 'em, they're back again another day -- like Trump, a once waser with money, and ambitions of a guy who thinks he could be elected the president. Is New Jersey's Christie a once waser? Will he rise again? Anthony Weiner is a once waser, I just hope his wife Huma isn't.

Chris Matthews, senior reporter on MSNBC, keeps me up-to-date with his nightly "Hardball" show.  He rebroadcast Dick Cheney's recent advice to President Obama, calling O "our weak president." Golly, I don't want to hear Cheney's out-of-date opinions, and pokes at our president, who is fighting -- with a great deal of grace and strength -- will continue to be fighting -- enormous race prejudice.

But hearing Cheney's words, brain-washed us before. Even though people don't believe Cheney or trust him, his words sink in and sit in our heads. "Weak" President" gets people wondering -- tasting it, repeating "weak president" till it sticks.

Like the words that Boehner and Congress keep repeating -- "Obama care is bad, health care doesn't work." It's brain-washed some of us who voted for Obama, and believed in Obama. Now we nod our heads silently, and find truth in "weak President,"  and let it slow down the fantastic progress we made when we elected him.

Hey, has-been Nick Nolte looks great now, and is back in the world again; and Britney's comeback has turned her into an eloquent interesting liberal lady.

Once wasers or not, we gotta shape up -- write, talk, post praiseful words for O whenever they occur to us -- pile on praise -- support the black guy in the White House who's won the war against prejudice by being there, and applaud with words his decisions -- his dealing with unsolvable national and international issues with strong wisdom.

Loud and clear and often, let's drown out the old fogey Cheney-ish naysayers.