WHERE OH WHERE IS KEANU REEVES HEADING?

At 54, Keanu Reeves wonders if at any point he will feel secure enough to take his foot off the gas and be content to just enjoy his life and make fewer films.

Keanu told the interviewer from GQ.com, "I wonder if this is going to be the house I die in? I never wondered about things like that when I was 40. I haven’t really thought about my career future, or what was going to happen, until recently. In 1995, when I was filming A Walk in the Clouds with Anthony Quinn, a two-time Oscar winner, Quinn was always on the phone, checking to see if he’d booked on this or that. I asked 80 year-old Quinn, is it always going to be like this? Quinn said there’s this idea that, like, at some point you’re going to be set, and then, maybe there won’t be so much working on working." 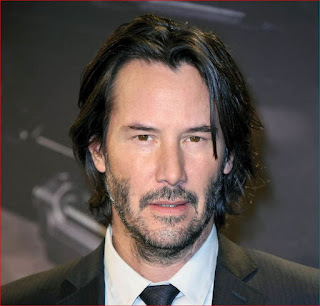 Was it just his mood, or a man who's earned more than $350 million from being in films, not sure what he was achieving.


I wikipedia-ed him. Keanu Reeves has a star on the Hollywood Walk of Fame. The New York Times has said he's a good actor. I searched around for sad events in his life and saw that he and his girl friend, Jennifer Syme, had a baby, a still born--their grief resulted in a breakup. Taking pills for depression, she sideswiped parked cars, her car rolled over and she was killed.  He postponed shooting The Matrix, expressing his need for peace and time to deal with it.

Although Keanu has revealed that he believes in God or some other higher power, he says his spiritual beliefs are "personal and private."

"Money is the last thing I think about," Reeves said when he gave about $80 million of his $114 million earnings from The Matrix sequels, relinquishing his contractual right to a percentage of the earnings from the ticket sales, which added $38 million back into the producers' film budget. Later, he co-founded a company that produce Henry's Crime, a film starring himself, and co-founded Arch Motorcycle Company, which builds and sells custom motorcycles. An avid motorcyclist himself, he's  certainly in control of what he does personally, as well as professionally.

At the same time, there's a photo of Keanu sitting on park bench eating alone that was used on news sites, and led to a "Sad Keanu" meme on internet forums. A Facebook fan declared June 15 as "Cheer-up Keanu Day."

Who is this guy really? There's a part of him that's a musician--he played bass guitar for two bands. Keanu, the writer, wrote the text for a book, "Ode to Happiness. As a producer director, he produced a documentary, "Side by Side," and directed the martial arts film, "Man of Tai Chi."

Just recently he created a cancer charity, but didn't attach his name to the organization. He supports PETA, the SickKids Foundation, and Stand Up to Cancer, explaining in an interview that his sister had battled leukemia for more than a decade.

But what he said to the interviewer from GQ.com--"Is this going to be the house I die in..."--that thought and his history tell me that what he's done so far in his life is not work that he loves. He seems to be building a structure where he can affect many people. He reminds me of Danish social critic, Kierkegaard, the existentialist philosopher, who said, "Since my earliest childhood a barb of sorrow has lodged in my heart--as long as it stays I am ironic, if it its pulled out I shall die." 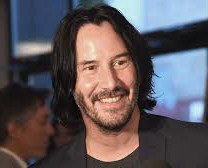 The words get me remembering my own sorrows. Anyhow, its good to see that at times, Keanu smiles, even laughs. 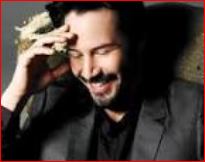 Having gathered all this information, I think that actor Keanu Reeves is uniquely, a famous movie star who probably never wanted to be a movie star.

No doubt about it, as this blog shows, I am a fascinated fan....