CAN THIS WINNER LOSE? 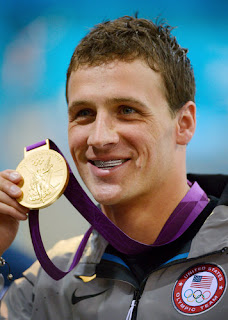 It takes a very special person to win at the Olympics, and Ryan Lochte won 12 Olympic medals -- six gold, three silver and three bronze -- he is the second most decorated male swimmer in Olympic history with seven individual Olympic medals. He has been awarded the World Swimmer of the Year Award, and the American Swimmer of the Year Award twice, been named the FINA (International Swimming  Federation) Swimmer of the Year three times. Spanning the Olympics, the World Aquatic Championships, Pan American, and Pan Pacific Championships, he has won a total of  90 medals in major international competition, 54 gold, 22 silver, and 14 bronze.

Wow!  Gathering this information I thought "wow." Re-reading this, and re-checking punctuation before publishing this, I think "wow!"

He learned to swim at age five. Both parents were swim coaches. Though his father occasionally kicked him out of class for blowing bubbles or hiding at the other end of the pool, in the Junior Olympics Ryan placed second. In high school, handsome and popular, he let it be known that he preferred basketball, skateboarding, and socializing with other boys and girls. Nevertheless, after graduating, he attended the University of Florida, where he swam his way to victory countless times -- was named North Carolina Athletics Swimmer of the Year twice, became a 7-time North Carolina Athletics Champion, a 7-time Southeastern Conference Champion, and a 24-time All-American.

No doubt about it, his background, his physical talent destined him to be a winner.

His good looks and charm landed him on the cover of Vogue; on People Magazine’s 2012 "Sexiest Man Alive" list. That same year, he appeared on "30 Rock," "Beverly Hills 90210," and starred on the E cable channel, in his own TV show, "What Would Ryan Lochte Do?" With his million Twitter and Instagram followers and more than 658K Facebook Fans, Lochte has gained impressive pop culture status outside the pool.

The drive to "win," plus talent, and his seeking and enjoying  fame and glory, has certainly made him a successful celebrity. 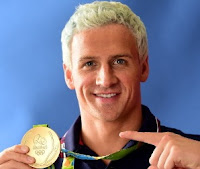 Dying his hair blue-grey for the 2016 Olympic Games, Lochte told USA Today, "At the Olympics I've always done the "grills," (the protectors swimmers use for their teeth.) I had to do something different so why not the hair? It's different -- that's me, that's my personality. People say, 'Oh, you're hiding your gray hair now that you're 32,' which is true, so I went full gray."

Celebrating his success in Rio, Lochte inspired shock and lots of headlines by claiming that he and three other Olympic swimmers were robbed at gunpoint by men who were impersonating local police. However, the Brazilian Police, watching surveillance footage, concluded there was no robbery -- the four swimmers, intoxicated, apparently vandalized a gas station's restroom and got into an altercation with a security guard who'd drawn his gun and demanded the swimmers pay for the vandalism.

The story dominated news headlines for several days. Lochte apologized in a statement posted on Instagram and Twitter in which he said: "I want to apologize for my behavior last weekend -- for not being more careful and candid in how I described the events of that early morning and for my role in taking the focus away from the many athletes fulfilling their dreams of participating in the Olympics."

Can swimmer Ryan Lochte turn around the stupid, wrong thing he did, and continue on as a major sports hero?

Here's what I think. I feel the child in this guy needs to make whatever he does front and center in everyone else's minds. Maybe, because I have some of that in me, and have had to let go of some of my big dreams in order to keep working as an artist, I find the needy child in him a bit repulsive and sad.

He's fascinating, but I can't say that I like him.

Anyhow, I think we'll hear and see more of him. It's been officially announced that he'll be dancing in Season 23 of "Dancing With the Stars." Win or lose, Ryan Lochte will be appearing on television and even in films as the former Olympic Super Star, who can dance, sing, as well as be very cleverly charming. He's already hired Justin Bieber's former crisis agent to handle him.

Will he, as he matures, focus on things other than what he's been focusing on, most of his life?  I hope  so.  Right now, I don't see that happening to a guy who at 28, is still so focused on himself. 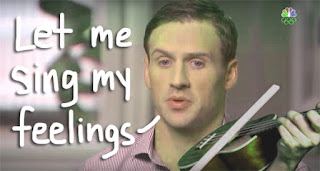 
Emily Frankel asks John Cullum, her husband, what he wants people to think, when he walks into a room. 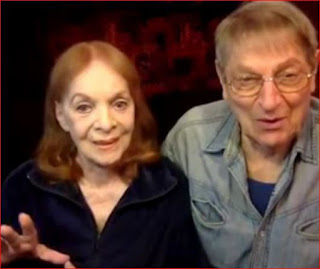 The Cullums picture and playact the various possibilities.