(VIDEO) TURNING OUR HOME INTO A STUDIO 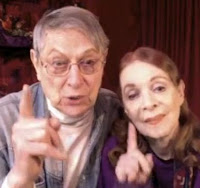 Though Emily Frankel doesn't have a subject planned, John Cullum and Emily, spur of the moment, describe what's involved when they're making videos for Em's Talkery.

Aside from Em picking a topic, they convert their upstairs living room into the recording area, covering windows, rearranging furniture; lights, disconnecting phones, intercoms, buzzers, and positioning their Mac computer, so that its camera and software (iMovies), can create their videos.

Though John teases Em for preparing everything extra early, we see how the Cullums click -- clearly they love working together.

Nothing is exaggerated, actressy unreal.

Has she ever done a film where she didn't give of herself, dig into all the places of herself as woman?

And Sally Field has words -- she can explain how she feels -- she does -- she did and embarrassed the Hollywood hierarchy where modesty and humbleness is what you present when you're in front of your peers -- that's a time when you have to pretend that you're just being yourself.

There was a time when a producer friend of mine was selling my novel, "Somebody, Woman of the Century," to a network that was making mini series.

"Who's the leading lady?" That's was the do or die question.

In my novel, my leading lady was born the first day of the new century and lived till 1999. I thought of Sally Field, or Goldie Hawn, or Diane Keaton/Annie Hall.

It was Sally. She was my first choice -- little girl Sally, grown up Sally -- bravely wicked, sensual, tender, innocent, honest, willing to sacrifice herself for what she believed in. A combination of impressions from various films -- girl-woman -- woman protecting her child, woman loving her man, down-to earth woman, compelled by her conscience, to change the status of women.

We have a collection of Katharine Hepburn women -- so many aspects of femininity that have become what we say/do/pretend/play. We have our Goldie Hawn selves -- nervy, unpredictable, brave, fearful and fearless -- we can make fun of ourselves ala Goldie. We are Diane Keaton/ Annie Hall -- holding onto our beliefs while evolving, learning, loving and demanding more reality.

From these actresses, who were more, much more than wonderful looking, are what many women (like me) envied, emulated, and tried to be.

Oh, there are others -- I'm sure you have images and goddesses, who have given you a vision of what you have tried to do and be.

What is it about Sally Field that wins the race in my mind?

Averageness. She expresses. She is compelled by something within her to be and say and do what she feels. Sally Field seems to be what I am, and understand how I would feel if I were she.

The printed Newsweek magazine is gone.

It's now published digitally each week but I think it was going-going-gone for me when it became the Newsweek Beast. (Was it a "beast" -- an always hungry, lower form of animal, that was sniffing, tasting, devouring whatever was around?)

I signed up for Beast updates. Twice-a- day in my e-mail appeared chewed-on bones, leftovers from what the magazine had lunched on.

Oh, it kept me aware of what was happening in the world, but it was selective, and Newsweek's taste, Newsweek's politics, and the head gal who ran the magazine were imposing their ideas on me.

Of course, what I read here and there in various magazines and newspapers inspire me to Google around and learn more. And yes, Newsweek Beast and the updates were valuable. But I still miss US. News & World Report that disappeared from my mailbox a couple of years ago. Okay, Time Magazine still arrives every week ... but ... well, it's getting thinner, and often the news seems unrealistically prejudiced -- often the guys who are running Time offend me with their almost righteous pronouncements.

I'm thinking of subscribing to The Week Magazine. The head guy's point of view seems a sort of swashbuckling nasty, but he's young, more open-minded. What's nice about The Week is its box of candy style -- little tastes of everything -- pictures of real estate you can buy, photos of food that's on dining tables today, thumbnails and words about trends -- what columnists are saying, job news, world news, TV news, tasty tidbits of world gossip. The magazine is about 50 pages, not crammed with ads -- (that's a selling point for me). The Week is an appetizer.

It's up to me to add garlic, salt, hot pepper, or whatever wakes up my appetite for more.

Hey, more, and just a bit more becomes a post -- like this one for you to chew on.

Bye-bye Newsweek. Once or twice they ran pictures

of John Cullum and me as an up-and-coming couple.

And golly, I'll never forget some of their cover stories -- like these two covers that came out sometime in the seventies -- stories on the up-and-coming Bette Midler and Steve Martin.

Time marches on -- internetting is okay, but I'll miss holding Newsweek in my hands.
Posted by em's talkery at 4:00 AM 5 comments: 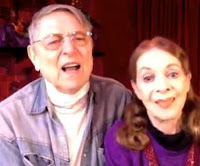 Em reminds John Cullum to e-mail a yes or no to Michael Price, the founder of the Goodspeed Opera House, in East Hadam, Connecticut. Michael invited John to become the host, the star performer for Goodpeed's 50th anniversary celebration..

Because the original, very first production of the musical, "Shenandoah" was created at Goodspeed, and it's a cherished memory for all who were involved, Price and his board of directors hoped John would sing the "Meditation," from the show.

As Em and John discuss the pros and cons of returning to Goodspeed for this celebration, Em is wowed, when John sings a bit of the song for her.