This dance... Oh my, we have seen -- golly -- so many wonderful scenes with Fred and Ginger dancing -- always performing steps and fantastically creative routines ...

But this scene from the film, "Swing Time" ... Well -- I'm an expert -- as a choreographer I had a special gift for dances that told a story, also -- for creating lifts and intertwining body relationships for twosomes, couples -- especially romantic duets.

Okay --  this scene In "Swing Time" -- it's near the end of the movie when things that were keeping this couple apart have escalated -- they're in love, but each is committed to someone else, someone worthy who will move him, move her, far away.  They pace, think, and walk -- moment by moment each step connects them more, then more, till they are married in dance.

Married?  Yes, watching it we know they have to stay, will stay, must stay together happily ever after.

In the heart of Brooklyn, New York, there's an eyesore -- the dirty, smelly, horribly polluted Gowanus Canal. This is a recent picture. 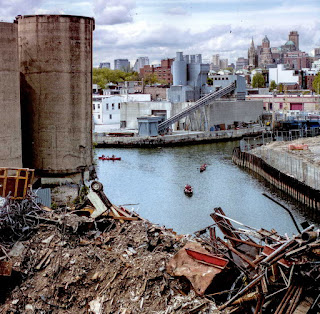 Built in 1869 as a means of transportation through what was fast becoming an industrial area, people   who lived in the area swam,  fished, even caught oysters in the canal. Along its shores, entrepreneurs built restaurants, night clubs, and bars. But after World War II, ships stopped coming. The Army Engineers stopped dredging, and gradually -- in the 90's -- as people focused more on living the good life, Gowanus became a  junkyard.

Today it's rife with toxic chemicals and human waste, corpses of dead dogs and cats, bags of garbage float in its waters. When it rains, the storm water enters the sewers in the area that cannot handle  the increased volume, so some of the waste and the surface runoff is  dumped into the Gowanus via old pipes that deposit millions of  gallons of  sewage overflow into the canal every year.

An environmental activist -- Christopher Swain -- swam the Gowanus recently, to highlight what was happening to it. He said  “It tasted like mud, poop, ground-up grass and gasoline. It’s just like swimming through a dirty diaper.”

Even though the EPA (the U.S. environment protection agency) has a $506 million dollar plan to excavate an estimated 588,000 cubic yards of contaminated sediment and put a cap on the sediment that remains, they can't do anything till the city builds retention tanks to handle sewage overflows, and the city has more than a hundred other urgent projects.

Whoa -- ho ho!  A Brooklyn architecture group --DlandStudio -- is planting native grasses on a dead end street next to the canal, demonstrating that grass captures the canal's surface runoff where it can be treated and cleaned with chemicals, before it flows back into the canal. They're raising money to create the "Gowanus Sponge Park -- a protective green sleeve around the canal.

Residents and businesses on both sides of the canal are signing up to help the way New Yorkers helped to fix up and eyesore in Manhattan -- an old, unusable elevated train station. (It's in "Old Chelsea," which happens to be our  neighborhood.) Replacing railroad track with boards, planting grass and  wild flowers, they turned that old station into a wonderful park.

This is a photo of what the Germans in Berlin did with the huge Spree canal that was full of raw sewage as it flowered through the city. Londoners are desperately trying to fix the same problem with the Thames.

Yes, people banding together are turning the polluted Gowanus Canal into a proud place for anyone and everyone to visit.

Hey, look around -- any junkyards, empty lots that look like dumps in your neighborhood? Whoa-ho -- try picturing them as parks and mention it one or two of your neighbors.