All these articles quoted a new study in PLOS.COM., an authoritative public library science journal that only publishes scientifically rigorous research. About 16,000 adults who were surveyed on their background, eating habits, and current health from 1988 to 1994, were followed up on for a period of 18 years. The  mortality rates for adults who consumed chili peppers were 21.6% compared to 33.6% for those who didn’t -- i.e. chili pepper eaters have a 13 percent reduced risk of dying. The Capsaicin in various chili peppers is, perhaps, the key to longer life.

The reliable journal refers to another study in 1997, which suggests that Capsaicin in hot peppers may prevent cancer, and hinder the growth of prostate tumors. Scientists introduced tobacco to hamsters to induce cancerous lung tumors. They gave one group Capsaicin and the other group a placebo. The Capsaicin group experienced less tumor growth in the lungs than the placebo group, indicating that hot peppers may also help prevent lung cancer in those who smoke or live in polluted areas. The journal also refers to two other studies about hot peppers being the key to longevity: A 2009 study in India concluded peppers were was not the key; a 2015 study in China however concluded chili pepper reduced mortality from all causes, including cancer and cardiovascular disease.

New York Times reporter, Nicholas Bakalar, quoted another very recent study by Dr. Benjamin Littenberg, professor of medicine at the University of Vermont, who said "The evidence isn’t strong enough to make me change my diet. Don’t smoke, limit calories, don’t drink to excess, get a flu shot every year -- those are things we have very convincing evidence will help you live longer. I don’t know how much chili pepper to tell you to eat.”

Guys, I'm hooked on Jalapeno chips. I blame it on my husband who habitually spices up everything I cook, more or less insulting me as a cook.  He adds tons of garlic powder, pepper, Indian curry, and cayenne.

Maybe there's something a little masochistic in eating spicy food, but it's a great way to stave off the most brutal elements of winter. The fact is, having indoctrinated my throat with spicy hot Jalapeno chips, I'm going to give chili peppers a try. Take a look at my not necessarily healthy doings.

Emily Frankel insists her husband, John Cullum, explain why he gets confused, often seriously pissed off when he's using his computer. 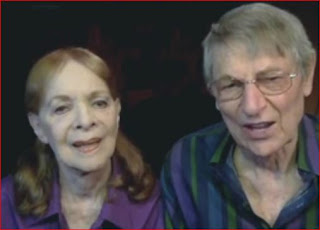 Mile a minute, he mentions things that most people do easily online.  Suddenly, paranoically, John claims the Internet was designed to make him feel stupid.

Emily, discussing specifics with John, can't eliminate his frustration, but it comforts him.