WHO'S THE FAMILY COOK? (Video) 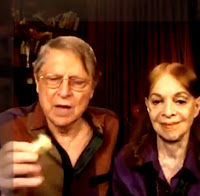 Emily is speedy, and can cook Hawaiian, American, Chinese, and Hungarian style.

But JC, who's meticulously careful and a clock-watcher type of cook, can cook wonderful pork chops, or ham steak, and beautifully fluffy mashed potatoes, and okra.

Em loves his cooking and JC loves the meals she prepares.

I must admit, after I've spent hours at the computer, and then, taken my dally barre, and danced full-out a section of my dance (that's my daily ritual), its utterly delightful for hear the intercom buzzing, and John announcing, "I've got dinner for you, Em, come up and make us our salad!" 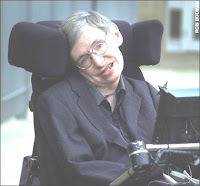 Lucky, lucky us -- we still have an alert Stephen Hawking observing the world, and excitedly sharing with us, thrilling us with what he's still learning.
Posted by em's talkery at 4:00 AM 3 comments:

Heather, it's very important -- what you posted on Facebook about the Vatican's handling of child abuse issues, and the fact that the Church's study

on abuse was greeted with "incurious contempt."

I think we've been hearing about the subject for such a long time, (I don't have the number at my fingertips but it's been more than a few years) that people are worn out. I've been sensing, and this is just my personal feeling, that people are tired of so many, many things that are being avoided and not dealt with -- like the wrong-doings within the Catholic Church.

There's too much to protest -- that's what I am feeling -- in the federal government, state, city, your neighborhood, on the social networks, and I don't know what to do. What can I do, or you do, other than absorb one more wrong thing that's happening?

Heather, this is my frame of mind, but I am justifying my own change in what I'm writing about. So I am hoping you will ignore what I'm saying, and at the same time -- the truth is -- I'm hoping you'll approve, and say enthusiastically, "Yes, go ahead Em!"

I've been writing a new post every day since March, 2009. I started posting on FB in May of 2010. I see that FB "friends," most people with whom I developed what I thought was real communication, have disappeared, are incurious, or gone into "blogging" -- posting stuff that expresses what's on their minds, and to me, much of it seems like "tweeting," (high pitched, peeping, spur of the moment little chirps that are easy to dismiss).

You're not doing that Heather. The shoe doesn't fit, but you have become a real blogger, a reporter, discusser of major political, social issues, and I'm feeling what I've said -- feeling, worn down by so many things that are need fixing..

I don't want to write about Romney, Palin or any Repub candidate, or Weiner's lies and crotch pictures, or Casey Anthony's horrible crime -- not while we're hearing about all that every day, almost every hour. My husband is in final rehearsals for two Shakespeare Plays in Central Park, and I'm working with an editor on re formatting my seven novels into e-books for Kindles. My husband and the editor need my eyes, ears, opinions, throughout the day.

I saw a message from you in my e-mail, just now, and haven't read it yet.

I miss you -- our personal back and forthing about you moving into a new home and me needing a vacation. I know I only need to say "I'm busy, I'm weary," but I see how deeply you are involved in current issues and want to explain why I can't jump on any of the bandwagons with you right now. I'm going to check the current e-book edits, cook a Chinese dish for my husband's midnight supper, and then I'm going to read and enjoy your message about your new house xoxox.
Posted by em's talkery at 4:00 AM 3 comments:

HOW DID WE MEET (video) 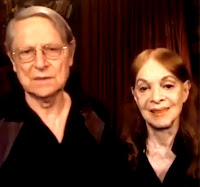 It happened in Gatlinburg, Tennessee. John was playing the lead in Tennessee's outdoor drama, "Chucky Jack."

The Cullums talk about their courtship. The time they spent together in Gatlinburg was the beginning of their love story .