Jamie Lee Curtis inspires me. There's lots of talk about her in the new version of "Halloween." I dug into various magazines, media, and film websites so I could talk about her today. 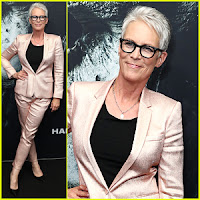 Though she grew up in Hollywood as the daughter of legendary actors Tony Curtis and Janet Leigh, the original "Halloween," made her a star back in 1978. I certainly remember the Oscar-nominated comedy "A Fish Called Wanda," and the unforgettable strip tease she did in "True Lies," and the way she body-swapped with Lindsay Lohan in Disney's "Freaky Friday." But what I fell in love with was her dancing--the sensual aerobics she did as she taught exercise classes in "Perfect," the film she did with Travolta in his dancing days, back in 1985. 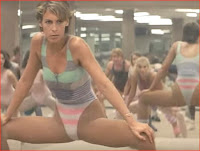 Along the way to today's "Halloween," she wrote 13 children’s books and many articles, became an accomplished photographer, stopped drinking, talked and wrote about it, and started a family with her husband, writer-director Christopher Guest, ("Waiting for Guffman") with whom she has two children.

In a recent interview, explaining she's not a fan of horror movies, Jamie Lee declared, “The new "Halloween" tells a story about trauma, especially the many kinds that women endure. The #MeToo and #TimesUp movements are the result of generational, systematic abuse of women, and the trauma that abuse generates in a person. Working on this film again kicked me into a creative space." Apparently shooting the film energized her so much that she wrote a screenplay for an eco-horror movie that she plans to direct.

Her recovery from an addiction to painkillers became an article she published as “The single greatest thing I’ll ever did in my life.” Her last children’s book, "Me, Myself & I" is about a mom who is  documenting her family’s life on social media. Jamie Lee told a reporter, “I cop to it too! How quickly you can hit the a little booster button that brightens you up." 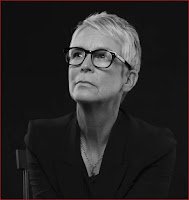 When Curtis posted a tweet about these record-breaking stats, her tweet went viral: "Here I am kissing 60. It's beyond my wildest dreams. I’m the luckiest girl in the world.”

I really mean it when I say yay Jamie Lee Curtis today.