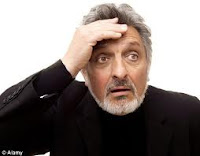 My agent friend said, "Ooo, I had a senior moment!"

I laughed appropriately, but I didn't feel like laughing. This friend was more or less my age. We were having a mile-a-minute conversation about books, trends, publishers -- dropping names, numbers -- how much so-and-so was paid for such-and-such a book, and the virtues of publishing my books as e-books.

I wanted to get out of his office, get back to my house, my place, my world, where I don't deal with "senior" anything.

When I lose a name, I say -- whatshername -- and just breeze on. When I was talking to another friend (quite some time ago, but I remember the conversation), I couldn't remember the name of the tiny machine you carry if you're an accountant -- "calculator."

That was the day I started a file called "Verbee," and began putting down words and names I forgot.

I'm not going to type out all the words on the Verbee list -- like "paraplegic" (typing it just now, I had to check the spelling twice).

And spelling -- I lose the ability to choose between lose (loose), choose (chose). My blog coach Fran has to proofread each blog I write, because I often misspell words, even common ordinary ones.

And computer processes -- two months ago I could open the "GARAGE BAND" program on our Mac computer -- we used it for the sound effects last year, when we did a staged reading of my play "Shattering Panes." Yesterday ... duh ... I forgot how to open, retrieve and use Garage Band so I could record John Cullum reading the first chapters of each of my six novels.

Okay -- but on THIS computer, my pal, my friend whom I meet with every day and use as my writing tool -- I certainly haven't forgotten any processes. I can do anything and everything I need to do, and MORE.

So, are my lapses -- spelling, names, words -- memory lapses? Or are they OVERLOAD?

Golly, all that, plus the barrage of the latest polls, the latest political attacks, wrong-doings, potential international issues, the very latest news, the nonstop ads -- all the stuff I'm being sold, or told is different, is better, while I'm simultaneously warned that it's dangerous, "beware," "do not use."

Dr. Em says: "Forgetting is not something you ought to be regretting."

I'm thinking that NOT REMEMBERING, is my brain, my body, maintaining its equilibrium. 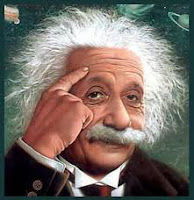 Albert Einstein said:
“It has become appallingly obvious that our technology has exceeded our humanity.”
Posted by em's talkery at 4:00 AM 6 comments: 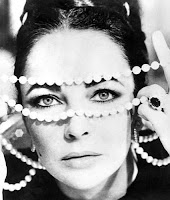 The film, her life story, is already being promoted. Soon, we'll be hearing again the raves and put downs, hearing and seeing clips of Elizabeth Taylor's films -- the ones that stay, stay, and resonate in my mind and yours.

Of course, we'll hear again about her love life -- lovers, husbands, and the transformation from a virginal looking young girl into the legendary, eight-times married "Liz Taylor."

I knew her personally. My perception is that of a relatively ordinary person who's had close-up glimpses and shared some events with her.

Did you ever sing, "Twinkle twInkle little star, how I wonder what you are. Up above the world so high, like a diamond in the sky?" In my sky, there are other stars -- Katherine Hepburn, Audrey Hepburn, Rosalind Russell, Judy Garland ... and also other spectacularly talented actresses, who affected my life and probably yours.

I remember a party at Elizabeth Taylor's house in Bel Air. Many many other stars -- everybody who was anybody was there. (The party was given for the cast, families and friends and stage crew who were involved in the Burton-Taylor production of Noel Coward's "Private Lives.")

I stayed on the other side of the huge swimming pool, attracting a lot of attention because of my dancer looks. Elizabeth was reclining in a lounge-chair surrounded, the center of a shifting crowd of familiar, famous faces and servants.

Servants with trays were mingling with us guests. My guesstimate -- there were easily 200 guests. I wanted to cross around the tiled-edge of the pool and say hello to the hostess -- was afraid she wouldn't remember me -- knew she remembered me -- knew I bothered her because Richard Burton paid attention to me -- yes, he paid attention of hundreds of others -- Elizabeth couldn't survive if she remembered them all.

Wow, egotist Emily, rudely not greeting the hostess who'd been supportive, kind, and good friends with her husband, John Cullum. The grown up, accomplished Emily was incapable of shoving aside her own sense of importance. and back then, couldn't bring herself to curtsy to the queen.

Elizabeth Taylor was a queen, still is -- queenly and womanly, and childish, like me. Also generous. And greedy, lustful, acquiring men and applause and creating with her talent, real ART. She gave us visions -- a deep sense of little girl, teenager, young woman, love struck newlywed, mother, lover, widow -- a sense of grief, selfishness, curiosity, courage, fear, jealousy, loyalty -- all that, and more, she gave us, and even after she's gone, she still gives us a inner vision of how to feel.

You can probably name your favorite films more easily than I can. As well as your favorite stars. Favorite? For me, that's a smallish, narrow, wrong word.

Elizabeth Taylor is forever, the Star of Stars in my mind.

There's an exciting new concept -- each and every person has an "Emotional Style." Scientific research has found there is a "neural basis" for our responses to life. And we can change them.

Right off the bat, I learned that every individual has his own "emotional fingerprint." These are the key elements: 1.Resilience. 2. Outlook, 3. Self-awareness. 4.Social intuition. 5. Attention. 6.Sensitivity to Context. 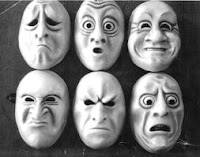 Not sure what these terms mean, I tried them on like stage masks. It sort of made "acting" sense.

Then, I tested them on my face. They were hard to do.

The book "The Emotional Life of Your Brain," by Richard Davidson, PHD, with Sharon Begley, Newsweek reporter, inspired these two authors to write a well-crafted article that gathered up the essence of what's in the book, and revealed how you can be in control of you, and your emotional ups and downs.

Emotional ups and downs have been my cup of tea as a performer and wife of an actor, who sometimes needs my directorial eye. So I read on. I have boiled down what I gathered from the article.

PHD author Davidson said, " In decades of research into the neurobiology of emotion, I’ve seen thousands of people who share similar backgrounds respond in dramatically different ways to the same experience." He carefully, not briefly, explained that just as each person has a unique fingerprint and a unique face, each of us has a unique emotional profile. (i.e. the authors wanted us readers to know that people are different.)

The article stated, "This is where the theory of emotional style breaks new ground." After mentioning the usual rats and animal tests, it explained that one's "positive emotions" sit in your frontal cortex behind the forehead -- one's "animalistic instincts, " terrors, fear, anger, and anxiety are deep within the brain's "limbic" system.

I looked it up -- it's the brain structures, common to all mammals, that are involved in olfaction, emotion, motivation, and behavior.

The researchers have learned that if you're "resilient" there's 30 times more activity in your prefrontal lobes. Measuring eye blinks of volunteers reacting to 51 pictures that had varying degrees of ugliness, scientists have learned about "sensitivity" to context.

Based on blinks and other research which the article detailed and explained, when the prefrontal cortex is involved, it shortens the time "amygdala" are involved. (I looked it up -- they're the almond-shaped mass of gray matter in the "temporal lobe.")

The good news is that you can change. You can cultivate greater "resilience" (This word, used frequently throughout the article was not explained -- I didn't look it up. I figure it meant more of less what it usually means.)

I must say, this seemed unnecessarily complicated. If you exercise, you get stronger muscles, and strong muscles help you do you work better, faster, more easily.

Anyhow, calling this "Mindfulness Meditation," the researchers stated that this meditation helps depressed individuals, who think bad thoughts over and over. You can weaken the connection between your prefrontal cortex and the amygdala by deliberately focusing on the negative thoughts. Repeating them over and over can activate your "circuits." When activated, you can move into the resilience "dimension."

As I read on and on, my resilience was definitely decreasing -- I couldn't help wondering what all this stuff was really saying.

Clearly, it's a hot topic that's selling magazines. A few weeks ago, Tim 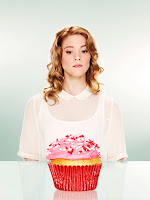 e Magazine had an article touting the science of building will power, a cute girl ogling a yummy cup cake, and summaries of three books on the subject -- "The Will Power Instinct," by Kelly McGonigal; "Willpower" by Roy Baumeister and John Tierney packed with science and celebrities as examples; "The Power of Habit, "by Charles Duhigg.

You can buy the books, or take this test in Newsweek.

Click this link. Keep track of "True" or "False" answers; add
them up and you'll know if you're slow to recover or resilient.