Emily knows this is a favorite topic for her husband, John Cullum. 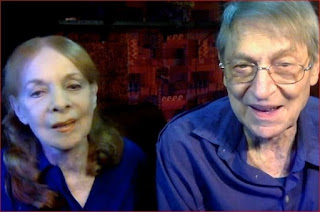 Dreaming of being in films since he was very young, John enjoys naming the names, and explaining why these famous stars continue to delight and inspire him.

WHY WE'RE WORRYING ABOUT UFOs

The headline in the NY Times scared a lot of people. In December, two pilots, (Navy Fighter Jet pilots), saw a cigar shaped object that moved strangely -- not like any known aircraft. They sent this video to the head guys at the Pentagon.


Our government has been investigating the possibility that aliens have visited the earth: Between 2008 and 2011, the Pentagon spent $22 million in a secret program that examined reports of flying objects -- unexplained sightings by pilots of aircraft that moved at what appeared to be incredibly high speeds with abrupt changes of direction and no visible signs of propulsion. The Times article also said the government had constructed specially modified buildings to house mysterious "alloys," (mixtures of metals) recovered from UFOs.

Wondering about that cigar-shaped object, I came across a photo from a California naval base, and a photo of UFOs rotating, not moving ahead, just rotating. 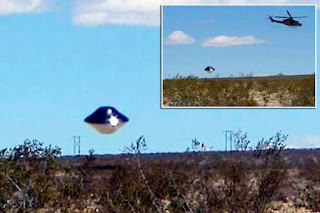 Jeff Wise, in NY Magazine.com, responding to the N.Y. Times article, said, "The hyped video about the cigar shaped object is too fuzzy to make out anything. Since 1940 we've been seeing unidentified objects in the skies. As for the storage shed, did scientists test the alloys. and determine the metals were not of earthly origin? The newspaper creates a sense of mystery with its questions, but leaves the questions unanswered. These techniques are great for exciting an audience but prove nothing."

Professor Michio Kaku, head of the theoretical physics department at City College of New York and CUNY Graduate Center, creator of award-winning documentaries, an authority on this subject, published this commentary on what the two pilots saw. 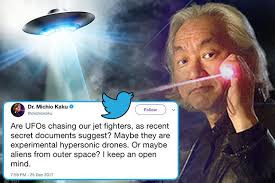 Summary of the situation by Luis Elizondo, former head of the Pentagon's UFO department.


Guys, the Washington Post said:  "It's surprising how little attention this story got. The idea of an alien invasion has not broken through the Trump bubble.  Like the solar eclipse of last summer, the hunt for extra terrestrial life reminds us that we are just a small part of an inconceivably large universe. In this year of petty partisanship and all-consuming chaos. that's something of a comfort."

I'm not comforted. Two distinguished, foremost authorities said "It could be aliens." (also) "We are probably not alone." I am wondering what can we do, what should we do about the aliens?