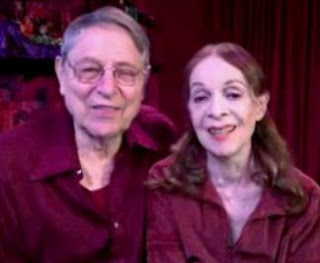 Sarah Palin is gone, her show on Fox news is over.

Here's what was said on WABC news.

In recent photos, she looks a little older and heavier -- am I going to get gleeful about that?  NO, but I read an interesting article that expresses what I'm sort of thinking.

WABC reporter, Shushannah Walshe, in "Reporter's Handbook," said:
"One thing I've learned in my years covering Palin, which began on Aug. 29, 2008, when Sen. John McCain selected her... she can get clicks and coverage like no one else.

Shushannah Walshe,  the co-author of "Sarah From Alaska: The Sudden Rise and Brutal Education of a New Conservative Superstar," points out that Palin's been written off again and again, but like a boomerang, she keeps coming back.

nevertheless. Sure, her weight goes up and down; she isn't always dressed perfectly, and yes, sometimes she says the wrong thing, but even so, she carries herself with confidence.

Oh yes, yes indeed, she's thoroughly knowledgeable, self-trained, by now it's instinctive --she KNOWS how to present her assets.

Very aware of her audience, her voice fills the room in a right way -- never too loud, or over-bearing. Conveying I see you, I'm like you, I understand you, with her spur of the moment remarks, she reaches out to us as if we're real friends. And of course, we laugh, smile back and connect with her.

Yes, with the poise and almost sublime confidence that a Miss America has, Palin articulates ideas from the book of Miss America philosophies -- a book chock-full of what everyone says -- everyone agrees -- is good for others.

It's makes me feel sputtery, ragged. I think it is just what we don't need more of.

Yowie -- that's what worries me about Sarah Palin -- millions of people love what Miss America/Miss USA offers us.

Well, fingers-crossed, eyes skyward, looking out for wham-bamming boomerangs, I am praying (and I'm an agnostic), we won't be dealing Palin for President in 2016.
Posted by em's talkery at 4:00 AM 7 comments: 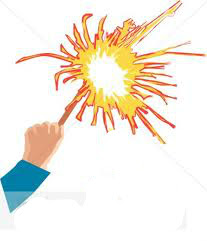 His child-like mind kept sparking, like one of those 4th of July hand-sparkler toys.  Yes, he left the world in June, but 91-year-old Ray Bradbury is still here.

I had a sparkler toy. I just grabbed it -- hiss, crackle, POP -- flashing colored streaks were my reward.

I loved playing with it, but also, it scared me. It seemed dangerous.

Glancing at Ray Bradbury's bio, I skimmed the list of his awards and honors -- more than a dozen -- learned he had four daughters, one wife, and since last year, he'd been writing a book.

Yep, he was a sparker, and he never stopped sparking.
He's certainly many young people's inspiring granddaddy. He inspired me without my being aware of it -- inspired me like my  teachers -- Shakespeare, T.S. Elliot, Tolstoy, Shaw, or Updike, or Evan S. Connell, author of "Mrs. Bridge."  I've got a page full of  names to thank for imbuing me a sense of language and rhythms, phonetics (sounds of speech and the recurring alternation of strong and weak elements in the flow of sound and silence in sentences or lines of verse.)

When I look at my six novels, I think -- eek, E.F., what a small amount of stuff you left on the world's shelf. Ray B. has lots of shelves, libraries all over the world have shelves loaded with his works.

So I look at the blog I've written since 2009, and think -- eek, self indulgent, too much flotsam and jetsam. (Yes, as a writer I was looking into underwear drawers and closets, remembering small, personal things that seemed important, but weren't.)

Ray Bradbury didn't dig or go searching for personal stuff that used to be important to him -- he made stuff, created new things from scratch.

Well, my digging into my past did help me evolve into the more picky me, the me who picks subjects to write about because the subject interests me. And may energize readers from the retirement home that Facebook is, or awaken Twitter guys who are filling their hope-chests with little peep tweets.

Hey, "retirement home?" -- "hope chest" -- why am I casting aspersions on readers who visit my blog?

I think it's because I'm thinking of how Ray Bradbury sparked, kept sparking, creating flashes of color, other worlds, kept giving suspense and excitement to millions of people. If you needed entertainment -- a video, film, short story, TV  series -- needed something to divert you -- if you saw "RAY BRADBURY" in the credits,  you knew.... hey, "saw?" -- ."knew?" -- why am I writing in the  past tense?

If you see  his name, you KNOW you are in for a pow-pow-wow of an  adventure. 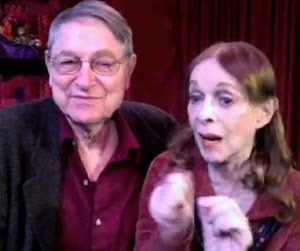 She reveals that it's a rather private subject.

But John Cullum's meticulousness never ceases to amaze his wife.

Em wants other people to know about the way he proceeds in an orderly fashion, to take care of things every morning.

Yes, this is a chat about how husband John Cullum makes the bed nifty, neat, perfect for his wife, Em.