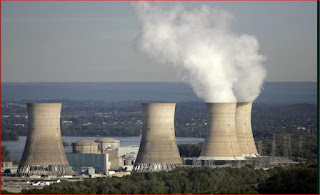 The New York Times, Wall Street Journal, and the Week Magazine are talking about Nuclear power. They are quoting scientists who are saying that keeping existing nuclear plants open and building dozens of new ones can help many countries, and enable the U.S. to reduce carbon dioxide emissions.

Here's the scary numbers: If we don't reduce our carbon dioxide emissions by 45 percent by 2030, and get to zero by 2050, extreme weather--devastating droughts, floods, wildfires, and storms--will get worse and occur more frequently.

After seeing Jane Fonda, and Jack Lemon in "China Syndrome," we're remembering "The Three Mile Island Incident" of 1979, and Chernobyl, 1986. And Fukushima, 2011 is still haunting us.

Actually, there have been at least 56 "accidents," (no deaths, but millions spent on repairs), at various nuclear reactors in the U.S. Even so, building more nuclear plants to generate electricity is being touted as a miraculous solution to the world's energy needs. Perturbing fact--Germany spent $580 billion on renewables (wind and solar), but electric bills in Germany are the highest in Europe, and its emissions have not been reduced. On the other hand, Sweden's three nuclear power plants with just eight nuclear reactors, along with the hydroelectric plants in Sweden's rivers, using water, a renewable, are generating electricity, and supply more than 40 percent of Sweden's energy needs, while other renewables supply the rest. Fascinating fact: Sweden's emissions have dropped by half.

Couldn't the U.S and other countries do what Sweden has done?

None of the articles in the prestigious newspapers suggest action.

Hey, I'm an ex dancer blogger-writer, not a facilitator or activist, but guys, THIS is something we need to investigate--not ASAP--but do now--start doing right away, immediately!