Ever heard of guitarist Steve Howe? In Newsweek, I read, "Getting to Yes: An Ode to Guitar Wizard Steve Howe," and saw a photo. 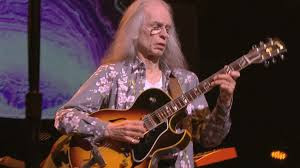 I'd never heard of him, but the guitar is more than a hobby for our son, actor JD. When he's not rehearsing or auditioning, he practices scales and guitar riffs -- sometimes does this twice a day for a few hours.

Steve Howe, 68 is the lead guitarist for "Yes," a progressive rock band that's been around since the late sixties. He's not a famous guitar wizard like Jimi Hendrix, Eric Clapton, Jimmy Page, Pete Townshend, Keith Richards, Eddie Van Halen, The Edge, Slash or Jack White. Even so, Howe is known and revered by just about everyone in the field. 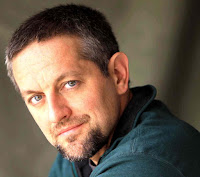 Actor JD, twenty years younger than Howe, has been in hundreds of plays and garnered raves from critics. Even so, the fame and fortune he dreamed of, ever since his first acting job at age 11, has not happened. Lately, he's talking about quitting acting.

His dad, Broadway Star John Cullum, and ex-dancer Mom understand the feeling -- it's a state of mind that happens to artists.

The Newsweek article describes how a fan stopped Steve Howe in the lobby of the Hampton Inn, where he was staying during the midst of 27 gigs in 37 nights, on his band's North American tour. Holding out an autograph book, the fan said, “Can I get your autograph. Are you somebody famous?”

Steve Howe jokes about the fact that he isn't a celebrity. While stars flit across the country on private jets, Howe travels from gig to gig in a rented Mercedes and stays at the less expensive hotels/motels in a town. He and his wife (the same woman he wed when they were very young), own a small ranch house, not a castle -- they don't have the usual trappings of the rich and famous. His only indulgence is guitars -- especially his beloved 1964 ES-175 Gibson that he bought with his earnings from his first job. It never leaves his home nowadays, but in the seventies and eighties, when he took it with him on Rock Band Yes tours, he booked separate seats for it. He's owned as many as 155 guitars at once. Why? Howe says very simply, “I want to have all the colors of the palette.”

No -- this man's not famous -- but if you read his Wikipedia resume, (click the link), or see his performances in videos, you know he's a real-true artist like a dancer, painter, sculptor, writer.

Hey JD -- he isn't successful -- he's like me -- the way I pooh-pooh what I've accomplished as a dancer and novelist/blogger because I'm not famous. Like you, because you are not a name in the theater world.  WE, JD, who have pursued an art all our lives -- how lucky, gifted, blessed we are. To have a dream -- to have something we strive for -- that we're almost reaching -- almost succeeding, but failing, going for it again, and again, and again.

It's a fire in your mind -- that fire is worth more millions than can be counted -- it's the sky full of stars like diamonds.

Somebody said (was it Confucius?), "Our greatest glory is not in never falling, but in rising every time we fall."

That glory -- it makes you a teacher and a preacher. You have it. That's what artist Steve Howe has. So does your Dad -- so do I.  That's why I wrote this, and embedded this film.